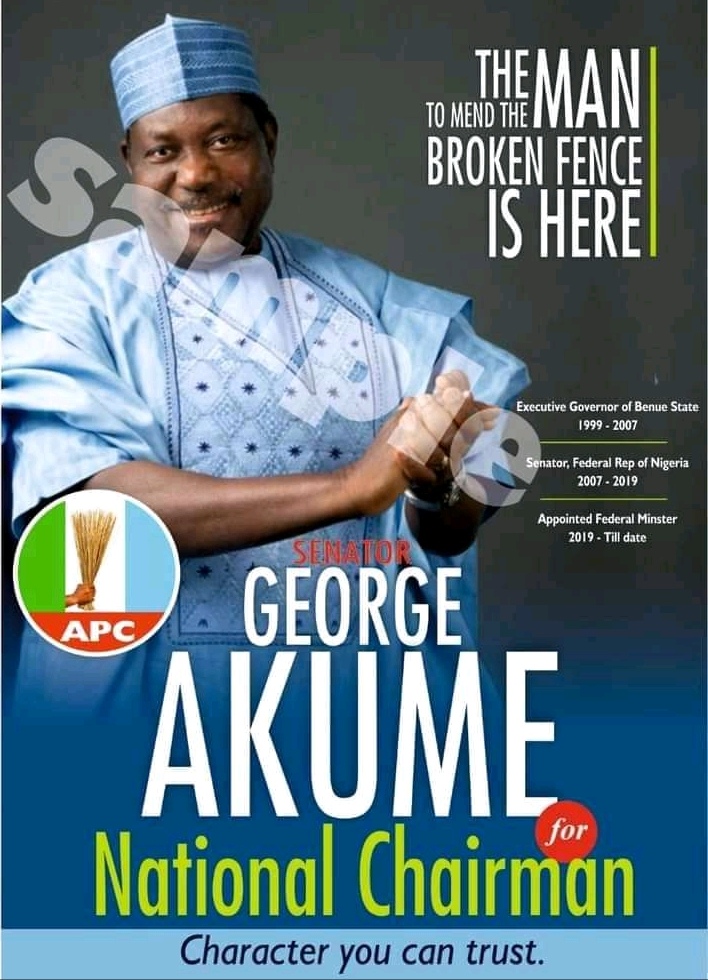 As the All Progressive Congress (APC) National convention draw closer many groups across the country are swinging their pendulum in favor of distinguished Senator Dr. Gearge Akume as the party’s National Chairman.

In a related development a group Called “SENATOR AKUME SUPPORT GROUP” who’s tentacles cut across the six geo-political zones in the country yesterday identified with Hon.Minister for Special Duties & Inter-Gover mental Affairs, Sen. George Akume in his office in Abuja.

The group under the leadership of former Governor of Edo state, His Excellency Prof Osunbor as her National Coordinator, Ex- Bauchi State Deputy Governor, His Excellency Abdulmalik Assistant National coordinator.

The group disclosed that her primary aim of visit was to throw her political heavy weight behind senator Akume to become the National Chairman of the party.

The Chairman of the group His Excellency Prof Usunbor in his speech described Sen. Akume as “A loyal party man with the pedigree and contact to take the party to an enviable heights”.

Senator Akume’s track records of winning elections since the return of democratic government in Nigeria and positions held which includes former Governor of Benue state, his numerous years at the National Assembly as Senator, one time Senate minority leader and his current position as the Honourable Minister for Special Duties and Inter-governmental Affairs is outstanding and proven that Sen Akume is indeed a man of the people with the requisite experience to man the seat, he , AKUME fit and will make APC proud as the National Chairman, the group concluded.

Reacting Distinguished Senator George Akume who defines a leader as a servant of the people, commend the group under the leadership of  Prof Usunbor for their critical political analysis and their decision well taken to stand by him to become the National Chairman of the party, further promised not to betray the confidence bestowed on him.

According to Ifeanyi Nwaudunna, most distinguished Senator George Akume as the National chairman of the ruling All Progressives Congress, APC will provide effective, transparent, result oriented and People based leadership.

He maintained that the cardinal focus of Senator George Akume is people, progressive and prosperous Nation. He will ensure reward for party faithfuls, progress of APC members and the entire Nigerians who are steadfastness in Nation’s progress.

Our Principal Senator George Akume believe that  the current challenges our Nation is facing, will be defeated with patriotism and support from Nigerians. Mr Ifeanyi noted.

What Nigeria is going through now, this would require even more dedication and patriotism from him and all his team, especially the political class working in collaboration to protect our gain as a people. Nwaudunna stated.

When Senator George Akume emerge as the National Chairman of All Progressives Congress, APC, he will mobilize the entire leadership of the Party APC to utilize the vast network of our membership in building a nexus around which will resolve injustice, promote peace and National cohesion.

Akume, The only solution, that will fix all the APC Problems and crisis and ensure for the party’s resounding victory come 2023 elections. Nwaudunna said.