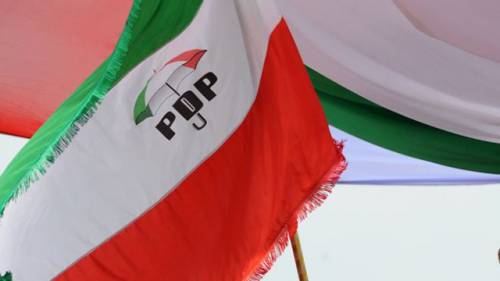 The influence of former Vice President Atiku Abubakar and his bid to actualise his presidential ambition in the 2023 general election is slowly slipping away as the Peoples Democratic Party (PDP) national convention planning committee declared yesterday that zoning of the national chairman of the party to the North was final.

This is even as scheming among Northern governors and leaders of the party over the national chairmanship position has intensified.

Leading the assault on the party’s presidential candidate in the 2015 presidential poll were chairman of the national convention planning committee, Governor Ahmadu Fintiri of Adamawa State, and his Bauchi State counterpart, Bala Mohammed.

They insisted that there was no going back on the decision to zone the national chairmanship to the North as ratified by the party’s National Executive Committee (NEC) last Thursday.

They however stated that the prospect of consensus arrangement over how the national chairman of the party emerges cannot be ruled out.

The governors spoke in Abuja after a meeting of their committee.

Zoning: Nigerians Will Decide Who Governs Them, Atiku Tells PDP
Fintiri who spoke with journalists after the committee’s meeting said, “The highest decision organ of the party has taken decision which is the NEC. And I think that decision is final. It is binding on all of us members. And we will abide by it. And that is what we are working on.”

On the prospect of consensus arrangement, he said, “I think it is too early for us to discuss consensus at this stage because this is a democratic party. It is open for contest and if the issue of consensus so arises, also, it is captured in our constitution.”

He noted that the size of delegates was still being compiled, even as he said, “PDP is a big party. It has produced a lot of good leaders for this country. We are compiling their list. But we are not expecting anything less than 4000- 6000delegates.”

Fintiri said sale of forms for the elective party offices will begin and that the screening and appeal committees were expected to end on or before next week to enable aspirants start campaigning.

On his part, Bauchi State governor, Bala Mohammed, maintained that the issue of zoning has been resolved once and for all.

He said, “We have resolved the issue of zoning. The PDP is a mature party; we have always done so with the experience we have garnered over the years and what we have been able to do for this country.

“We have learnt our mistakes, we are not going to play to the gallery the way and manner our detractors or our competitors want us to be.

“We will always resolve our issues. So, zoning is over. We have really gone over this issue. What we are looking forward to is the emergence of a chairman from the North, who will give us the leadership that we require to form a government in 2023.”

On consensus arrangement, Mohammed said it is normally a process of democratic consultation because democracy is about consensus.

The governor stated: “Certainly, the electoral process can be reduced by having a converging point on an individual and that would have reduced the disparaging issues within the party.

“I did say we should have a consensus candidate, but where we will not, we will not practice imposition”.

Recalls that PDP National Executive Committee (NEC) had last Thursday endorsed the zoning of the chairmanship to the north despite opposition from some party leaders from the zone.

Party leaders from the zone met that same Thursday after the NEC meeting and set up a 20-member committee to deliberate on how to micro-zone offices allotted to the region.

But fresh indications emerged yesterday that the party leaders might be far from reaching any form of compromise on a consensus candidate for national chairman as moves by governors from the zone to project former Senate president Iyorchia Ayu as the choice candidate was opposed.

A source privy to the outcome of the meeting of party leaders told our correspondent that Ayu’s name was raised by a governor based on the argument that a chairman of Christian faith has to emerge to pacify the Christians. Hotmedia.ng learnt

The source who did not want his name in print said, “They tried to sell the candidacy of Iyorchia Ayu to them as a consensus candidate but it was stoutly resisted.

“It became clear that the governors from the North had been working with their southern counterparts on the Ayu project. However, Northern leaders opposed it, noting that there are other candidates from their region who are interested.

“Then it was decided that each of the 3 zones should produce one candidate each for a meeting that will be held on Wednesday next week.”

So far, there are three chairmanship hopefuls from the three Northern zones. While former governors of Katsina and Kaduna, Ibrahim Shema and Sen Ahmed Makarfi, have indicated interest from North West, former Gombe State governor Ibrahim Dankwambo and incumbent deputy national chairman of the PDP, Sen Suleiman Nazif, are said to be in the contest from the North East.

It was further gathered that the multiplicity of aspirants from the North Central is a subtle protest against the plot by the Northern governors in conjunction with their Southern counterparts to impose a candidate on the party.

Meanwhile, another source told our correspondent that a process is being arranged whereby three candidates from each of the zones would be allowed to be voted for to produce a consensus candidate.