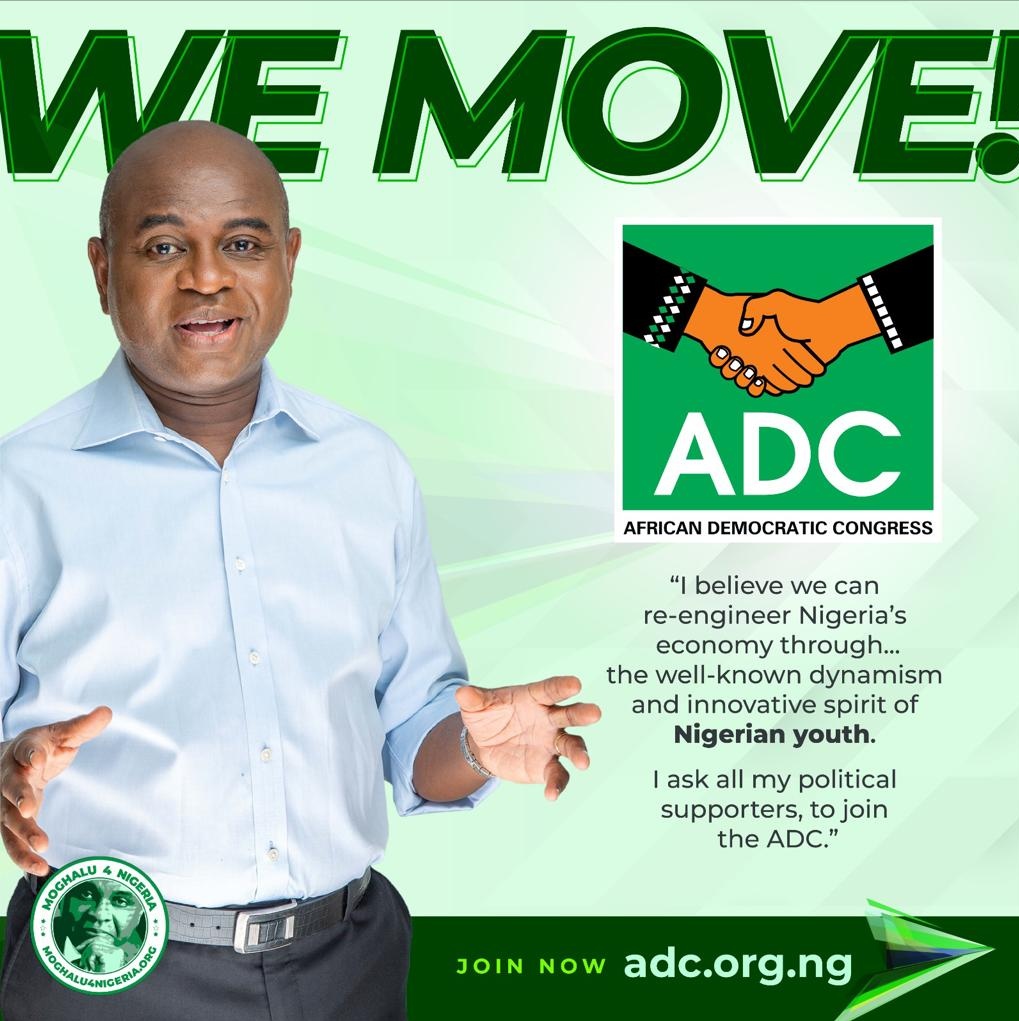 Former Deputy CBN governor, Kingsley Moghalu has pitched his tent with the African Democratic Congress, ADC ahead of the 2023 Presidential Elections.

Prof. Moghalu who formally announced in a press conference on Friday October 8, 2021 that he is now a member of the ADC after leaving his former Party, the YPP in 2019. He aims to clinch the party’s ticket as its Presidential candidate.

According to Kingsley Moghalu, for the past year, he have been part of group of individuals and political parties working towards the emergence of a “Third force”

I am pleased to announce today that I have joined the African Democratic Congress (ADC) Political party. Moghalu stated.

He emphasized that the ADC is a key player in this effort to create a new and bigger ” megaparty” platform through which a merger of several political parties to take power in 2023 and the starts the task of rebuilding our beleaguered country.

Moghalu said, while joining ADC, that every part of Nigeria today can benefit being part of one big united, prosperous and powerful nation.

According to him, to achieve this vision, Nigeria need a new “Third Way” politics anchored on pragmatic ideology and visionary, competent leadership.

Hotmedia.ng recalls that in June 2021, Moghalu announced his intentions to content for the Nation’s top seat in the 2023 Elections. Moghalu contested as the presidential candidate of the Young Progressive Party (YPP) in 2019 and lost to incumbent President Muhammadu Buhari. He finished 14th on the election log with just 26,039 to Buhari’s 15.1 million votes.

I believe we can re-engineer Nigeria’s economy through a system of developmental capitalism that taps into the well known dynamism and innovative spirit of Nigerian youth, Prof Moghalu stated

Kingsley Moghalu reveals his vision, is one in which millions of youth can create jobs and move out of poverty and into the middle class, the market functions well,  the government creates an enabling policy environment for all Nigerians to achieve prosperity, and an effective social security system is established to take care of our elderly population.

Read Also : Every Part Of Nigeria Will Benefit If We Remain One Nigeria – Prof Kingsley Moghalu

He affirms his faith in African Democratic Party. By saying, i feel ideologically aligned with the ADC.  Since its founding in 2005 to date, including in the 2019 general elections in which the party presented the late Dr. Obadiah Mailafia as its presidential candidate, the ADC has remained consistent in its commitment to the emergence of true democracy in Nigeria, and to the role of belief, passion, and ideas in nation-building.

Prof Moghalu advise Nigerians, that the political status quo and its two major parties have failed Nigerians. To vote for them again is to waste your vote.  He admonished

Moghalu said, the results, for the past 22 years,  include rigged elections, Nigeria as the poverty capital of the world, 4,000 megawatts of electricity for 200 million people, 33% unemployment, terrorism, and our lives today cheaper than the naira to the dollar.

We must now focus on governance beyond politics if we are ever to escape from today’s mess and the misery it will surely continue to generate if the same recycled politicians remain in charge. He said.

In showing his willingness and readiness to present himself to Nigerians in 2023 Election. Moghalu, “i am honoured to become a card-carrying member of the ADC”. He said

In doing so, i restate my public announcement on June 1, 2021, making  myself available to lead our country as a competent, 21st century President, and my intention to contest in the 2023 presidential election. Hotmedia.ng gathered

I look forward to a close collaboration with the Chairman of our great party, Chief Ralph Okey Nwosu, Alhaji Said Baba Abdullahi, the ADC National Secretary and the National Executive Committee, the Chair of the Board of Trustees, Distinguished Senator Patricia Akwashiki and her colleagues on the BOT, and the members and candidates of the ADC, for the party’s growth and expansion in the months ahead. Prof Moghalu retracted.

Read Also : What My Government Has Done, Obasanjo, Yar’Adua, Jonathan’s Fails To Do – Buhari Reveals

I ask all my political supporters, including those aspiring to be elected to gubernatorial positions and the national and state legislatures, to join the ADC. He stated.