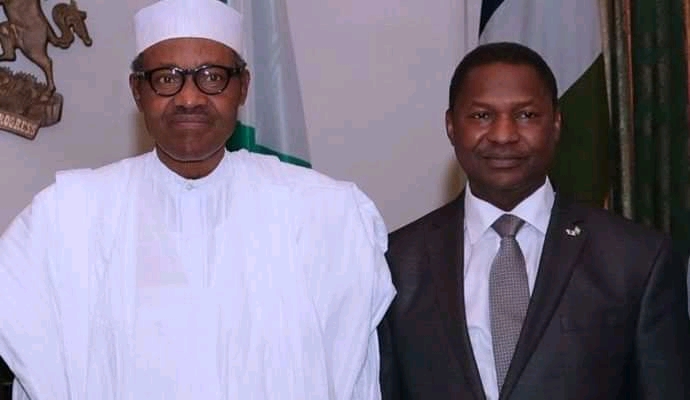 President Muhammadu Buhari has finalised plans to sack at least 15 members of his cabinet, including the Attorney General of the Federation and Minister of Justice, Abubakar Malami before the end of 2021, Hotmedia.ng has gathered.

A top source in government, however, told the newspaper that Malami has begun moves to truncate the plans.

The Chief Law Officer of the country was said to have met with top members of the Aso Rock cabal to prevail on the President not to sack him.

“President Buhari is planning to sack 15 Ministers with Malami topping the list. Someone gave him the hint and he has started fighting back so bad. He doesn’t want to be sacked.

“Moreover, he is enjoying the support of lots of corrupt politicians, including senior members of the cabal because he is assisting them to sabotage corruption cases,” a presidential source told SaharaReporters.

The President in a statement after their sacking said changes in his cabinet will be “a continuous process”.

“Two years and some months into the second term, the tradition of subjecting our projects and programmes’ implementation to independent and critical self-review has taken firm roots through sector reporting during Cabinet meetings and at retreats,” the statement signed by Femi Adesina, presidential spokesman had read.

“These significant review steps have helped to identify and strengthen weak areas, close gaps, build cohesion and synergy in governance, manage the economy and improve the delivery of public good to Nigerians.

“I must commend this cabinet for demonstrating unparalleled resilience that helped the government to navigate the disruption to global systems and governance occasioned by the emergence of COVID-19 shortly after inauguration. The weekly Federal Executive Council meeting was not spared because the traditional mode was altered.

“As we are all aware, change is the only factor that is constant in every human endeavour and as this administration approaches its critical phase in the second term, I have found it essential to re-invigorate this cabinet in a manner that will deepen its capacity to consolidate legacy achievements.”

SaharaReporters had reported in a series of detailed investigations exposed how Malami acquired several properties whose value runs into billions of naira since being appointed by Buhari.

For example, the AGF has an underground hotel in Sokoto, three houses at Peace Estate, Abuja, a brand new state-of-the-art school in Kebbi, two houses for his sons worth N100 million each, and a new hotel under construction in the Jabi area of Abuja.

Malami also bought a house in 2020 worth N150 million in the Gwarimpa area of Abuja.

A newly constructed school located at the back of NITEL in Gesse Phase 1, Birnin-Kebbi, and a new house worth N600 million on Ahmadu Bello Way, Nasarawa GRA, Kano, are among properties acquired by Malami since he became a minister under President Buhari.

That is not all, Malami also built a N3 billion multipurpose event centre in Kebbi state named Azbir Arena for his son in Kebbi.

This is apart from Rayhaan Hotel located on Zaria Road, opposite Aminu Kano Teaching Hospital, which the AGF massively upgraded.

Ever since SaharaReporters published a series of detailed reports exposing these illicit acquisitions, the online news medium has been a target of the AGF’s camp.

Apart from claiming to have sued SaharaReporters over the expository reports he said had damaged his reputation before the world, Malami also issued a petition to the former Inspector-General of Police, Mohammed Adamu, seeking the arrest of the Publisher of the online newspaper, Omoyele Sowore.

Despite the open display of unexplained wealth by the AGF and members of his family in recent times, President Buhari, who rode to power in 2015 on the back of a promise to crush corruption, especially in the government circle, has yet to offer any statement on the development.

Observers say Buhari’s silence is an endorsement of the atrocities of one of his most trusted lieutenants, Malami.