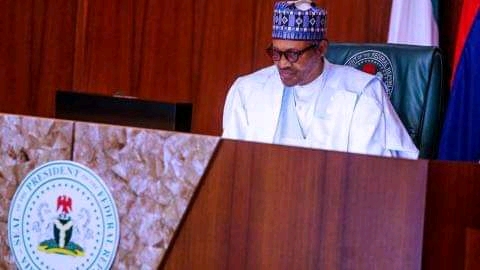 Buhari disclosed this in his nationwide broadcast to Nigerians to mark the nation’s 61st independence anniversary.

Buhari, who had in the past said the country’s unity would not be negotiated, in his October 1 address said, “Nigeria is for all of us. Its unity is not negotiable. And its ultimate success can only be achieved if we all come together with a common goal of having peace and prosperity for our nation.

“We shall continue to work on dialogue-based solutions to address legitimate grievances. But we remain ready to take decisive actions against secessionist agitators and their sponsors who threaten our national security.”

This comes amid growing calls for the break-up of Nigeria by secessionists.

Again Independence Day, Protesters commence RevolutionNow BuhariMustGo protest in Abuja.
Some Nigerians have however called for the restructuring of the country, to give regions or states more power.

Some Nigerians have commenced RevolutionNow and BuhariMustGo protest in Abuja, Nigeria’s capital city on the country’s Independence Day anniversary.

Early on Friday morning, October 1, the protesters could be seen chanting and displaying banners and placards saying ‘Buhari Must Go’.

Nigeria is marking its 61st Independence anniversary on October 1 this year.

Human rights activist, Omoyele Sowore had on Thursday Nigerians to protest across the country on independence day to reject President Muhammadu Buhari.

The activist was reacting to a statement released by a presidential aide Femi Adesina on Thursday titled ‘October Independence Anniversary: President Buhari to broadcast to the Nation’.

“I am urging all citizens and non citizens of Nigeria to boycott @MBuhari’s national “INDEPENDENCE DAY” broadcast scheduled for tomorrow, instead you should partake in protests across d country tomorrow to reject this man,the Failure-In-Chief of the Federal Republic #BuhariMustGo