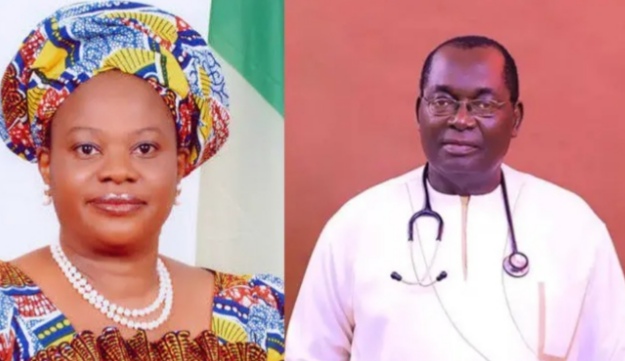 Dr. Chike Akunyili, husband to late former Information Minister and the former director-general (DG) of the National Agency for Food and Drug Administration and Control (NAFDAC). Have reportedly murdered by unknown gunmen

Hotmedia.ng learnt he was killed at Umuoji in Idemili North LGA of Anambra State on Tuesday evening.

Though details of the incident are still sketchy, a source close to the family said the deceased was still at the University of Nigeria Nsukka Alumni Association (UNAA) where the late Dora was honoured some hours before he was killed.

The source, who was shattered by the murder, said: “God, pls render the devil and his agents powerless and useless.

“I was with this man yesterday same yesterday at Sharon Hall, All Saints Cathedral, Onitsha. It was an occasion of University of Nigeria Nsukka Alumni Association (UNAA), Onitsha branch event where they honoured late Dora Akunyili.

Chike was said to have spoken glowingly about his late wife, Dora, at the event, where he also donated the sum of N500,000 to the association.

He was there with his son ,Obum now working with Anambra state government.

“We saw them off to the car and it was emotional when Obum hugged him tight as both of them separated to join their respective vehicles.

“Obum was in a white Hilux while the man was in a big Jeep (i think Prado).

He went for his late wife’s memorial lecture in Onitsha and was going back to Enugu, that was when the thing happened. He was shot dead by gunmen. I don’t know how it happened,” the source added.

According to Chike’s brother, Cyril in an Instagram post on Wednesday said, “IPOB killed my senior brother. Why? Husband of Prof Dora Akunyili is dead. IPOB why on a Tuesday?”

His wife, a former director-general of the National Agency for Food and Drug Administration and Control (NAFDAC), died in an Indian hospital on June 7, 2014 at the age of 57 after a prolonged ailment.

Chike and his late wife had six children. Shared by Cyril Akunyili.

After the death of his wife, Chike described her as “an elephant who loved her country even during her travails”.

“Her love for Nigeria was phenomenal and beyond words; even in her last days when she was very ill, she insisted that she would serve the country with her last breath.

“She wanted a home called Nigeria where citizens could live and enjoy,” he had said. He stated.

The Akunyili family has, at least since Dora, sacrificed their intellect, time and other resources towards making Nigeria, a better place.

Dora the Amazon, literally gave her life to ensure that we did not die from fake drugs and bad foods and beverages. It was in the course of working for our good and the good of the nation that cancer ravished her system.

Had she taken time off, early enough, maybe, that dangerous thing would have been discovered early enough and possibly eradicated from her system.

Her husband Chike and her beautiful children have had to carry on with life without her, with equanimity.

Dr. Chike has been taking up different roles in their native Anambra, not so that he can have a more comfortable life himself, to God’s glory, he has everything he needs to lead a comfortable life, but that isn’t enough, he wants a better life for millions of  Nigerian youths. Not for his own biological children. Those ones have already saved themselves.

Uncle Chike could have quietly left this steadily eroding country of ours and spent the rest of his life in comfort outside the shores of this country, but he remained here, out of love, out of patriotism and out of that desire to do his own little bits for the good and prosperity of my own generation.

If anything, Dr. Chike is one of the few who provide glimmers of hope for a better and brighter  Nigeria. He is a patriot, by all shades of understanding that word.

Police spokespersons in Anambra and Enugu did not return calls seeking comments from The Hotmedia.ng Correspondent on Wednesday morning.

The attack came amidst raging insecurity in the South-East, fuelled largely by armed herdsmen, separatist agitators and even security forces.