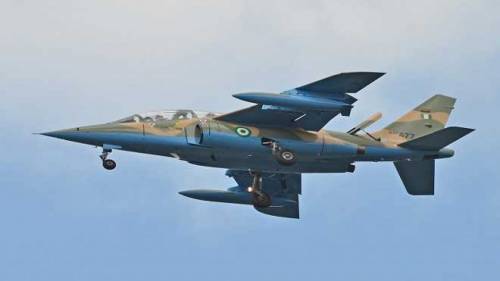 A fighter jet operated by the Nigerian Air Force has mistakenly dropped a bomb on a Nigerian community in the Lake Chad region.

Twenty people said to be fishermen reportedly lost their lives during the incident.

According to People’s Gazette, the airstrike happened on Sunday in Kwatar Daban Masara but information about the incident had been slow to circulate due to obsolete communications infrastructure in the area.

It was learnt that community was about 50 kilometres from the Borno State capital, Maiduguri.

The attack came barely two weeks after the Nigerian military bombed a community in Yobe, also in Nigeria’s war-ravaged North-East, killing at least 12 people while many others were seriously injured.

The Nigerian Air Force had initially denied dropping a bomb on Buwari village but later admitted and promised an investigation after Governor Mai Mala Buni publicly acknowledged the incident and commiserated with the victims.

Meanwhile, the Nigerian military has been conducting air raids across the region since 2009 when Boko Haram insurgents launched attacks against the state.

In 2017, an air force pilot dropped a bomb on a village in Rann, Borno, killing dozens of civilians.

The military apologised and promised a thorough investigation but did not make its findings public four years on.