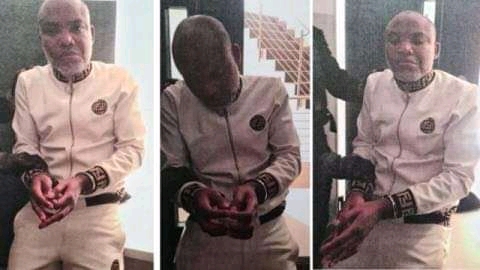 The N5billion suit filed against the Nigerian government by the detained leader of the Indigenous People of Biafra, Nnamdi Kanu, detailed the extensive torture meted out to the IPOB leader in Kenya as revealed by one of the brothers, Prince Emmanuel Kanu.

According to SaharaReporters, who exclusively obtained a copy of the suit filed by the IPOB leader where it was exposed that he was beaten by the Nigeria’s security operatives in Kenya till he fainted – an incident which reportedly occurred several times but he was quickly revived with cold water.

According to an affidavit sworn by Emmanuel Kanu in the suit, the Nigerian government officials refused to allow Kanu access to the restrooms, and he was forced to defecate ad urinate in the detention room – with same substance smeared on his body by the operatives.

The suit was filed by Kanu’s lawyer, Aloy Ejimakor, in Umuahia, the Abia State capital before a state High Court on September 7, to press for Kanu’s release to get adequate medical treatments among other rights entitled to him.

The suit is in enforcement of Kanu’s right to life, dignity of the human person, personal liberty, fair hearing, no arbitrary arrest and detention and no unlawful expulsion.

The Affidavit in support of the originating motion was done by Prince Emmanuel Kanu, brother to Nnamdi Kanu.

He said, “That the facts and violations deposed to in this affidavit started at the applicant’s residence in Isiama Afaraukwu Ibeku, Umuahia North Local Government Area of Abia State; to wit; the military invasion of the applicant in September 2017 by a combined team of Ohafia-based 14 Brigade of the Nigerian Army, the Abia State Command of Nigeria police force and the Abia State directorate of the State Security Service.

“That was it was the said invasion that nearly took the life of the applicant that caused him to seek refuge abroad which ultimately to Kenya, where the respondents lawfully pursued him, abducted him, disappeared him and ultimately brought him to Nigeria and detained him.

“That in October 2015, the applicant was arrested in Lagos upon his return from the United Kingdom, detained in Abuja and ultimately charged for certain offences Charge No: FHC/ABJ/CR/383/2015 (Federal Republic of Nigeria vs Nnamdi Kanu). That the applicant was detained for 18 months, but was later released on bail whereupon he returned to his home in Isiama Afaraukwu Ibeku, Umuahia North, Abia State, and there awaiting his next trial date set fo October 2017.

“That in the course of the invasion, the applicant managed to escape to a safe location from where he managed to flee overseas to save his life. That there was neither a court order revoking the applicant’s bail nor any arrest warrant that could have justified the deadly military assault.

“That had the President implemented the provisional measures, the applicant would have felt safe enough to voluntarily end his exile and return to Nigeria to face prosecution in the said charge under reference therein. That in the course of his exile, the applicant on or about May 5, 2021, entered the Republic of Kenya on his British passport and was admitted as such as Jomo Kenyatta International Airport, Nairobi. After his admission, the applicant settled in at a temporary location in Nairobi, Kenya.”

Emmanuel Kanu then went on to reveal in detail the “abduction” of Nnamdi Kanu from the East African country and his ordeal in the hands of the Nigerian security operatives at a private residence where he was taken to.

He said, “That on June 19, 2021, the applicant drove himself and without any companion to Jomo Kenyatta International Airport, to drop off a friend at the airport. That as soon as the applicant pulled to stop at the parking lot and alighted from his vehicle, about twenty respondent’s agents (hereafter abductors) violently accosted and abducted the applicant, handcuffed and blindfolded him, bundled him in a vehicle and sped away, while telling onlookers that the applicant is a “terrorist separatist.”

“That the applicant remained chained to the floor for eight days and was thus forced to relieve himself of urine and excrement where he was chained with same being smeared all over his body. That throughout the duration of the applicant’s captivity, he was not allowed to bathe and was fed only on bland bread once a day and given non-sanitary water to drink.”

Sahara Reporters had on September 7 reported that Ejimakor, lawyer to the detained IPOB leader, headed to court over the latter’s health issues.

It had been reported that the access roads to the court were blocked by truckloads of the military, police and other security agencies, which created fear in road users in Umuahia.

Ejimakor, in an application, Nnamdi Kanu Vs Federal Government of Nigeria and seven others, had brought an ex parte order asking the court to, among other things, make an interim order of release of Kanu to attend to his health in any medical facility of his choice in Nigeria, pending the hearing of the motion.

The high court presided over by Justice K. C. J. Okereke had asked the lawyer to put the respondents on notice.

“The next hearing date is set for 21st September, 2021 in Umuahia. The material issue is the unbroken chain of infringements that began with the 2017 extrajudicial attempt on Kanu’s life in Abia State; his involuntary flight to safety/exile; his abduction in Kenya and his extraordinary rendition to Nigeria.

“We believe that these supervening issues have complicated Kanu’s prosecution and thus must be judicially dispensed with before any further prosecutorial action can proceed. Accordingly, I have placed the following reliefs before the Court:

“1, A DECLARATION that the military invasion of the Applicant’s building and premises at Isiama, Afaraukwu Ibeku, Abia State on 10th September, 2017 by the Respondents or their agents is illegal, unlawful, unconstitutional and amount to infringement of the Applicant’s fundamental right to life, dignity of his person, his personal liberty and fair hearing as guaranteed under the pertinent provisions of Chapter IV of the Constitution of Federal Republic of Nigeria, 1999 (hereafter, CFRN) and the African Charter on Human and People’s Rights (Ratification and Enforcement) Act (hereafter, the Charter).

“2, A DECLARATION that the arrest of the Applicant in Kenya by the Respondents or their agents without due process of law is arbitrary, illegal, unlawful, unconstitutional and amounts to infringement of the Applicant’s fundamental right against arbitrary arrest, to his personal liberty and to fair hearing as enshrined and guaranteed under the pertinent provisions of CFRN and the Charter.

“3, A DECLARATION that the torture and detention of the Applicant in Kenya by the Respondents or their agents is illegal, unlawful, unconstitutional and amounts to infringement of the Applicant’s fundamental right against torture and to fair hearing, as enshrined and guaranteed under the pertinent provisions of CFRN and the Charter).

“4, A DECLARATION that the expulsion of the Applicant from Kenya to Nigeria by the Respondents or their agents and their consequent detention and planned prosecution of the Applicant in Charge No: FHC/ABJ/CR/383/2015 (Federal Republic of Nigeria v. Nnamdi Kanu) is illegal, unlawful, unconstitutional and amount to infringement of the Applicant’s fundamental right against unlawful expulsion and detention, and to fair hearing, as enshrined and guaranteed under the pertinent provisions of CFRN and the Charter).

“5, AN ORDER OF INJUNCTION restraining the Respondents or their agents from taking any further step in the prosecution of the Applicant in Charge No: FHC/ABJ/CR/383/2015 (Federal Republic of Nigeria v. Nnamdi Kanu) pursuant to said unlawful expulsion of the Applicant from Kenya to Nigeria.

“6, AN ORDER mandating and compelling the the Respondents or their agents to forthwith release the Applicant from detention and restitute or otherwise restore Applicant to his liberty, same being his state of being as of 19th June, 2021; and to thereupon repatriate the Applicant to his country of domicile (to wit: Britain) to await the outcome of any formal request the Respondents may file before the competent authorities in Britain for the lawful extradition of the Applicant to Nigeria to continue his prosecution in Charge No: FHC/ABJ/CR/383/2015 (Federal Republic of Nigeria v. Nnamdi Kanu).

“7, AN ORDER mandating and compelling the Respondents to issue an official Letter of Apology to the Applicant for the infringement of his fundamental rights; and publication of said Letter of Apology in three (3) national dailies.

According to the copy of the suit obtained by SaharaReporters, Ejimakor, had in a statement in support of the affidavit, had noted in his conclusion that the court should bar the Nigerian government from further prosecuting Kanu.

“In conclusion, we submit that there is an overriding need for his honourable court to bar the respondents from any further detention and prosecution of the applicant in charge Number, FHC/ABJ/CR/383/2015 followed by the immediate restoration of applicant to the liberty he enjoyed as of the date he was unlawfully and arbitrarily arrested. We therefore urge this honourable court to resolve the lone issue in favour of the applicant and to grant the prayers sought,” Ejimakor said.