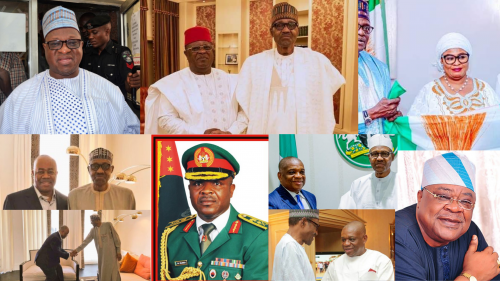 Since the coming of President Muhammadu Buhari’s administration in 2015, a number of Nigerian politicians and political leaders with corruption cases hanging on their necks have found a haven in the ruling party, All Progressives Congress.

The defection of such political leaders to the APC has automatically stalled prosecution of their corruption cases – a pattern that negates the self-acclaimed anti-corruption campaign of the present regime.

During the 2019 elections, Adams Oshiomhole, a former National Chairman of the APC had announced that those who joined the ruling party would have their “sins” forgiven.

He encouraged more politicians in opposition parties to toe the path of some members of the Peoples Democratic Party (PDP) who had defected to the APC at that time.

“I am told that there are a lot of very senior people from PDP who have decided to join forces with President Buhari to take the broom to sweep away PDP and to continue to ensure that APC continues to preside all over Nigeria.

With the latest being the defection of the discredited former Minister of Aviation, Femi Fani-Kayode to the APC, SaharaReporters catalogues a number of politicians with corruption cases gradually forming a new gang in the APC.

Read Also : List Of 20 Notable Achievements And Legacies Of Thomas Sankara In 4years – A Big Lesson For Today’s African Leaders

In November 2020, Dave Umahi, Ebonyi State governor formally defected from the PDP to the APC alongside members of his cabinet with the claim that the South-East geo-political zone had suffered injustice from the PDP.

Meanwhile, the Economic and Financial Crimes Commission had linked Umahi with an alleged diversion of N400 million into private pockets during the 2015 presidential election through an arms deal.

The governor’s property had also been sealed before he opted to join the APC and have his “sins forgiven”.

Former Governor of Akwa Ibom State and current Minister of Niger Delta Affairs, Godswill Akpabio also defected from the PDP to APC in 2018, claiming it was because he discovered that President Muhammadu Buhari was “a man of integrity and a nationalist.”

Meanwhile, there were tons of allegations levelled against Akpabio from when he was Akwa Ibom State governor. Akpabio was accused of diverting over N100 billion from the oil-rich state between 2007 and 2015.

There have also been allegations of his involvement in N40 billion fraud in the Niger Delta Development Commission which is under the supervision of Akpabio’s ministry.

On August 27, 2021, a former Minister of Aviation, Stella Oduah, who recently joined the APC, claimed she joined the party to change the political narrative in the South-East.

Oduah, like others, has been under investigation by the Economic and Financial Crimes Commission for her alleged involvement in over N9.4 billion fraud.

The allegations included a dubious contract for the supply of security equipment to 22 airports across the country.

A former Governor of Abia State, Orji Kalu, after nine years of intense legal battle to avoid being convicted for charges of corruption, formally joined the ruling APC in November 2016.

Kalu left the Progressives Peoples Alliance for the APC while his prosecution for alleged money laundering, by the EFCC to the tune of N3.2 billion, was ongoing.

In 2019, a former Governor of Oyo State, Adebayo Alao-Akala reportedly defected to the APC from the Action Democratic Party (ADP).

The EFCC had levelled accusations of an N11.5 billion fraud case against Akala, alongside Hosea Agboola, a former Oyo State Commissioner for Local Government and Chieftaincy Matters; and Femi Babalola, an Ibadan-based businessman.

The trio are facing 11 counts bordering on conspiracy, awarding contracts without budgetary provision, obtaining money by false pretences, acquiring property with money derived from an illegal act, and concealing its ownership.

In 2016, the Department of State Services arrested Ihejirika.

A source said, “It is true that we picked up the former COAS; he is helping us with the investigation into the arms procurement when he was in service, but it is too early to say when he would be released on bail.”

The former chief of army staff had denied allegations against him.

A former governor of Plateau State, Joshua Dariye, who was convicted of criminal misappropriation and criminal breach of trust in September 2016 also defected from the PDP to the APC.

The EFCC had charged Dariye to court in 2007, accusing him of diverting N1.126 billion from the Plateau State government’s ecological fund.

In June 2018, Adebukola Banjoko, a judge of the Federal Capital Territory (FCT) High Court in Gudu, sentenced Dariye to 14 years imprisonment having found him guilty on 15 out of the 23 counts preferred against him.

However, the Court of Appeal in Abuja in November 2018 commuted the sentence from 14 years to 10 years and this was confirmed by a five-man panel of the Supreme Court in March 2021.