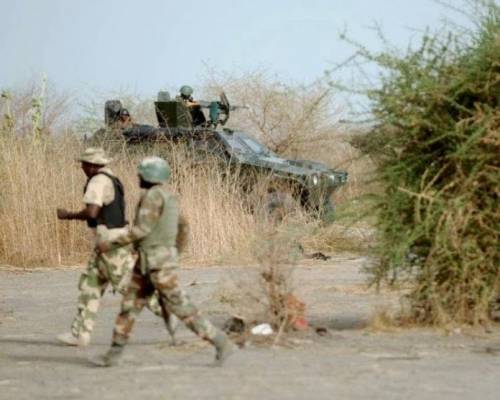 A yet-to-be confirmed number of soldiers have been killed and several others missing after an ambush by militants from the Islamic State-backed faction of Boko Haram, the Islamic State West Africa Province (ISWAP), formerly known as Jamā’at Ahl as-Sunnah lid-Da’wah wa’l-Jihād in Borno State.
Hotmedia.ng gathered that the attack took place in Monguno on Thursday.

Monguno is over 100km north of Maiduguri, the state capital and hosts thousands of Internally Displaced Persons, mostly from Dikwa and Marte council areas.

“We lost so many soldiers during the attack that lasted for many hours. May their souls rest in peace,” a military source prayed

The source added that military vehicle, several weapons and ammunition were stolen during the attack.

The Nigerian military has repeatedly claimed that the insurgency has been largely defeated and frequently underplays any losses.

In the past months, soldiers have been targeted by the insurgents.

Hundreds of soldiers and officers have been reportedly killed since January 2021.

Some soldiers were killed during the year when two explosive-laden vehicles rammed into a military convoy in Wulgo.

The suicide bombers were identified as Abu Bakr al-Siddiq and Bana Jundullah.

In February, about 20 soldiers were also killed in Malari, Borno State by the insurgents.

Hotmedia.ng gathered that the soldiers were on patrol to clear some Boko Haram elements in the area following credible intelligence when they were ambushed by the group