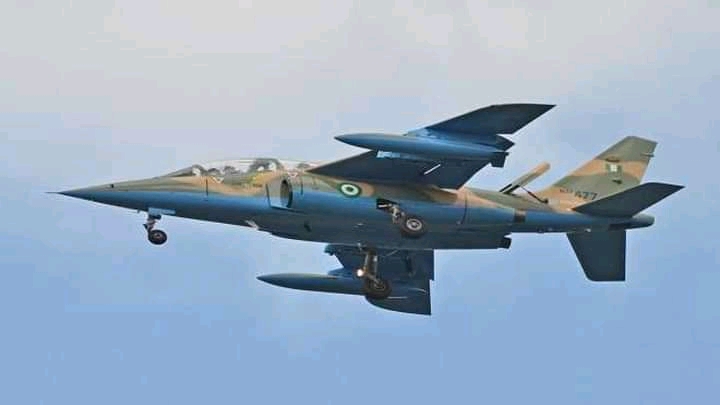 The Nigerian Air Force has finally admitted that a military fighter jet involved in the counter-insurgency operation in the North-East bombed a village in the Yunusari Local Government Area of state.

This is coming hours after NAF spokesman, Air Commodore Edward Gabkwet had issued a statement claiming the bombing did not occur.

The community is located 20 kilometres away from Kannamma, the headquarters of Yunusari Local Government Area.

However, Gabkwet in another statement on Thursday said the pilot of the fighter jet observed suspicious movement consistent with Boko Haram in the area and fired some probing shots.

The statement read, “Following intelligence on Boko Haram/ISWAP movements along the Kamadougou Yobe River line, an aircraft from the Air Component of Operation Hadin Kai was detailed to respond to the suspected terrorists activities in the area along the Nigeria/Niger border at about 0600hrs on 15 September 2021.

“The aircraft while operating South of Kanama observed suspicious movement consistent with Boko Haram terrorists behaviour whenever a Jet aircraft is overhead. Accordingly, the pilot fired some probing shots. It is important to state that the area is well known for continuous Boko Haram /ISWAP activities. Unfortunately reports reaching Nigerian Air Force (NAF) Headquarters alleged that some civilians were erroneously killed while others were injured.

“Initial release denying the involvement of NAF aircraft was based on the first report available to the Air Component which was subsequently forwarded to NAF headquarters that civilians were bombed as the aircraft detailed for the mission was not carrying bombs. Therefore a Board of Inquiry has been set up to thoroughly investigate the circumstances of the incident. Thank you.”

Villagers in the past have reported some civilian casualties in bombardments in Northeastern Nigeria.

Recently, a military jet that came to repel an attack by Boko Haram dropped a bomb that landed in a compound where civilians were having the christening of a new baby.

A fighter jet also on a mission against Boko Haram extremists in April 2021 mistakenly bombed men of the Nigerian Army, killing over 20 officers.

The soldiers who were reinforced from Ngandu village were said to be on their way to Mainok, headquarters of the Kaga Local Government Area of Borno state which was under attack by militants from the Islamic State-backed faction of Boko Haram, the Islamic State West Africa Province (ISWAP), formerly known as Jamā’at Ahl as-Sunnah lid-Da’wah wa’l-Jihād.

Some of the Chibok schoolgirls kidnapped by Boko Haram in 2014 and freed last year also said three of their classmates were killed by Air Force bombardments.

In June 2021, an offensive aerial bombardment the NAF Alpha jet carried out around Genu town in Niger State resulted in the killings of some wedding guests.