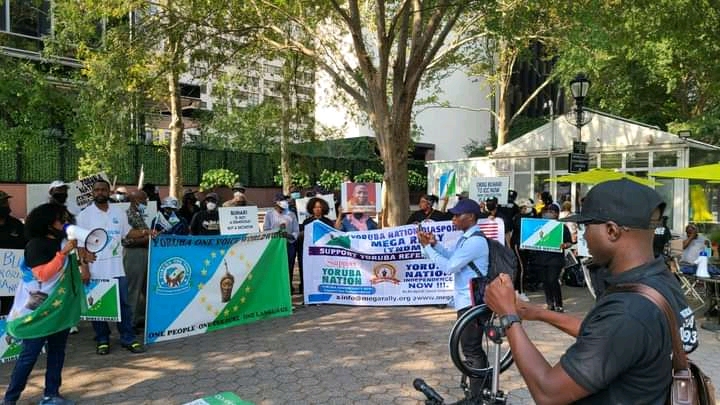 The Nigerian Indigenous Nationalities Alliance for Self-Determination (NINAS) has reacted to a statement by the Presidential spokesperson, Garba Shehu saying they cannot be taken seriously as long as they associate with the Indigenous People of Biafra (IPOB).

In a statement released  on Wednesday, NINAS spokesman, Maxwell Adeleye clarified that the group has nothing to do with IPOB and should not be seen as such.

Adeleye said the NINAS Million-Man march is already a success, adding that the group awaits President Muhammadu Buhari’s visit to the United States.

He said: ”The NINAS Million-Man Freedom March is a SUCCESS. It really rattles the Buhari Government. The Nigerian Government is now begging the Media not to cover our events, trying to paint our March as an IPOB event.

“This is a divide and rule tactic that has failed. NINAS has nothing whatsoever to do with IPOB.

“We should now prepare for the 24th September 2021 when Buhari will address the General Assembly to stage another march.”

SaharaReporters had earlier reported how the Nigerian government reacted to the ongoing protest by NINAS at the United Nations headquarters in New York, United States of America.

Members of the Nigerian Indigenous Nationalities Alliance for Self-Determination stormed the UN headquarters in New York on Tuesday and Wednesday, urging world leaders to facilitate the conduct of a referendum in Nigeria.

The Presidency has, however, attacked Yoruba Nation agitators, saying they cannot be taken seriously as long as they associate with the Indigenous People of Biafra (IPOB), which it accused of committing many atrocities.

A statement signed by presidential spokesperson, Garba Shehu on Wednesday said, “For Nigerian diaspora groups to use the world’s largest platform – the United Nations General Assembly – to garner attention to their causes is not unexpected. It was, however shocking, to see ‘Yoruba Nation’ advocates yesterday unequivocally throw their lot in with Indigenous People of Biafra (IPOB).

“IPOB is a designated terrorist organisation. It has now publicly revealed a 50,000 strong paramilitary organisation. It regularly murders security services and innocent civilians, with a significant uptick of violent attacks this year. And it is currently attempting to hold Nigerian states hostage with orders to stay at home under threat of terror.

“Without doubt, Nigerians and the entire world will judge Yoruba Nation by the company it keeps. No one can take seriously this organisation if it continues its IPOB association. When their allies systematically trample human rights, it raises sober questions about their claims to uphold the values of the UN.

“The cooperation is a worrying development, once parsed with Yoruba Nation’s increasingly violent rallies in Nigeria. Actions and associations speak louder than words. Yoruba Nation’s talk of human rights promotion must therefore be ignored.

“Meanwhile, the Nigerian government will continue its work at the UN- to fight against corruption and illicit financial flows, and international cooperation. If we want to see stolen funds returned to their rightful home in Nigeria, the government must continue to campaign for and coordinate global action on asset recovery.

“The government will remain the leading regional actor in the fight against global terror – particularly against threats emanating from the Sahel. Through the Nigerian Technical Aid Corps programme, the country also shares technical expertise with countries from the Caribbean, Africa and the Pacific. At the same time, the administration is implementing a programme of environmental sustainability to combat developments which destroys Nigerian communities in vulnerable regions.”

“Only through the 2030 Agenda on Sustainable Development can we secure a prosperous future for Nigeria. As the largest country in Africa, the government takes seriously its leadership role and will continue to strive for continental unity, cooperation, and shared prosperity.”

“Our expectation is therefore for the media to work with the government to focus attention on the core issues the President, the leader of the country has on his programme.”