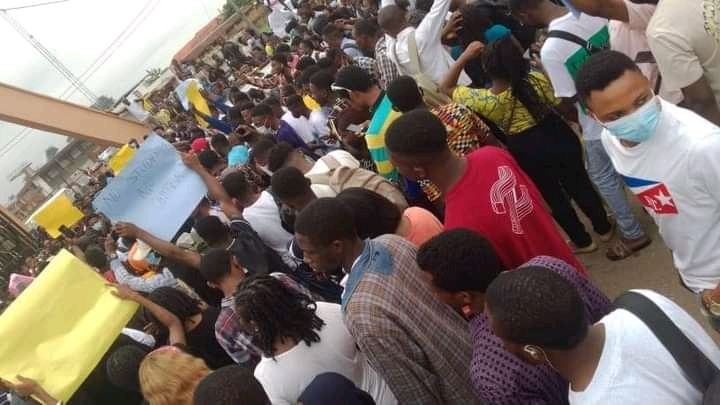 Aggrieved students of the University of Benin (UNIBEN), on Wednesday, ignored the order of the university senate to close down the school, as they continued their two-day-old protest over the hike in their school fee.

Though the university, earlier on Wednesday announced the “immediate” closure of the institution, “temporarily”, claiming insecurity and the possible highjack of the protest, the students remained adamant.

Rather than complying with the directive that they should immediately vacate the campus, the students marched to the official lodged of the Vice-Chancellor, Prof Lillian Imuetinyan Salami, and practically “kidnapped” her.

Having seized the professor of Food and Nutrition, the students forced her on a tortuous journey from her official residence to the university’s main gate on the Benin-Lagos road, on foot.

Read Also : Just In: University Of Benin Shuts Down School, Orders Students To Vacate Over Protest

Sandwiched among the sea of heads, the protesting students made several video recordings of the Vice-Chancellor, trekking the long distance.

When the train got to the Engineering Faculty, the visibly exhausted VC pleaded that she should be allowed to complete the journey in a vehicle.

Nigerian Tribune gathered that while a Toyota Hilux was provided for the remaining trip, the students, however, deflated two of the four tyres of the vehicle.

Besides, Professor Salami was not accorded the luxury of riding in the demobilised vehicle alone, as some of the students jumped into a vehicle with her “to ensure that she did not escape,” the source volunteered.

As at 3.30 pm, commuters on that axis of the road had to detour to the inner roads by Precious Palm Royal Hotel to connect Uselu area.

The students, it would be recalled, had on Tuesday, blocked the two campuses on Ekenwan Road and Ugbowo in protest against the hike in the tuition fee by N20,000.

Trouble started when the university closed the students’ registration portal, three weeks after the resumption and surcharged those who could not register, while the portal was opened a late registration fee of N20,000.