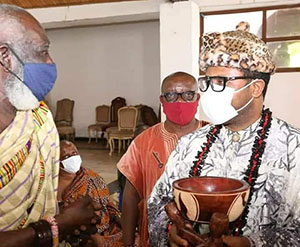 That day, people from all walks of life converged at the palace of Atta the 2nd to witness the epoch event.
In a statement, HRM Ihenetu described the event as means of projecting Igbo culture in the Diaspora.

“What we are witnessing today is celebration of culture. From now onward, Ndigbo in Central region, Ghana would now have sense of belonging because they now have leader in the person of Igwe Chinedu Kingsley. The royal father said with Igwe Kingsley emerging Igbo king in Central Ghana, Igbo in that region will now be in touch with development in Ghana as a whole.

In recognition of this great move, with the Cape Coast kingdom officially performing their traditional right as a sign of approval, Igwe Chinedu Kingsley was crowned the Eze Igbo- elect, Central Region, Ghana.

In his remarks, HRM Ihenetu assured the Atta ll Oguaahen, that his subject, Igwe Kingsley would always submit to the laws and Authority of the land, for peaceful coexistence of Ndi Igbo living under his kingdom.

Atta ll Oguaahen urges Igwe Kingsley to make sure he respects HRM Ihenetu, who presented him because ‘a boss is always a boss’. “He can enthrone and dethrone”, he said. The Chief went further by telling him that his palace is always open for him in case he needs any directive or advice from the owner’s of the land.
Highlights of the event was Atta ll Oguaahen presenting a gift to HRM  Ihenetu.

HRM Ihenetu assured that Igbo kingdom and Central Ghana kingdom will continue to work together to move the nation forward.