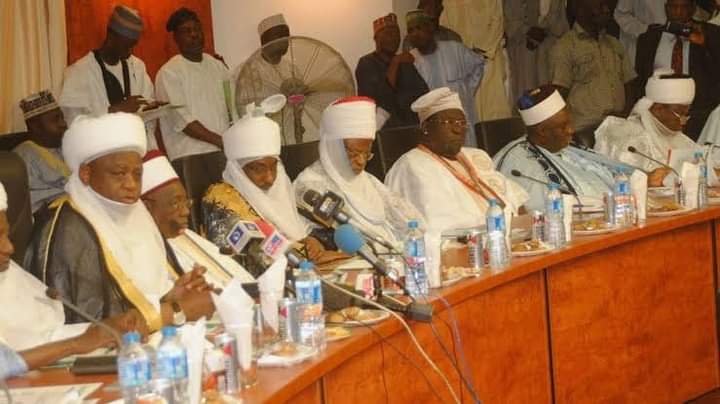 Leaders of northern Nigeria from 17 groups, including the Arewa Consultative Forum (ACF) and the Northern Elders Forum (NEF), declared on Friday that the North was ready for restructuring of Nigeria but it would not succumb to any blackmail to rotate the presidency with the South.

The groups, under the aegis of the Northern Peoples Summit, took that decision in Kaduna, Kaduna State, after what they described as two days of deliberations. They issued a 12-point communique literally emphasising the political advantage which the North currently enjoys over the South.

Read Also :There Is No Zoning In APC – Governor Yahaya Bello

The North will not be stampeded or blackmailed into taking major decisions around rotating the presidency,” they said.

“The Northern Peoples Summit convened on the 7th and 8th April, 2021 at Arewa House, Kaduna, to discuss the issues bedeviling the North and the Nigerian State. These include security, restructuring, economic, politics and the survival of the Nigerian State.

“After two days’ intensive discussions, the summit resolved as follows:

“To sustain the summit as a productive forum for utilising pan-Northern assets in the search for resolution of Northern problems;

“To encourage Northern elites and political leadership to improve their levels of sensitivity to inclusiveness and management of the North’s pluralism.

The North will be stronger if it addresses its internal weaknesses, particularly around ethnoreligious matters, as it relates to its challenges with the rest of Nigeria. Perception and practise of creating minorities and majorities among Northerners should have no place in the North, nor is discrimination on the basis of place, faith or ethnic group of any Northerner;

“The North believes that restructuring the country is now a vital necessity for survival as one united entity.

“The North will not be stampeded or blackmailed into taking major decisions around rotating the presidency.

“The North draws attention of the country to the inherent fragility of the Nigerian state. For Nigeria to survive, all parts of the country must equally commit to supporting its continuation as one entity, without equivocation or subterfuge. The North extends an invitation to groups that are genuinely interested in discussing the future of the country.

The North believes that every interest can be accommodated in one united, just and equitable nation, but the North cannot be the sole custodian of this endeavour.

“The North warns against the continuation of demonisation, attacks and killings of Northerners in the Southern parts of the country. It demands that federal and state governments must take firmer steps to protect members of Northern communities who live in the South.

This includes the arrest and prosecution of persons who are involved in these dangerous activities.

“The North urges Northern communities to continue to exercise restraint and be good hosts.

“The North invites the attention of President Muhammadu Buhari, Northern governors and legislators to the fact that under their watch, the North has sunk lower in all indices of human existence.

Delegates at the summit commit to continuously engage in searching for solutions, as well as raising their voices against poor governance, corruption and absence of commitment to deal with insecurity, poverty and hopelessness among Northerners.

“Government should show effective presence in all ungoverned spaces in the North. “The North resolves that there should be government backed negotiations and dialogue with the bandits, Boko Haram and affected communities for effective peace in the North.

Read Also :FOR A BETTER NIGERIA: Moghalu Embarks Consultations On The State Of The Nation.

“The North appreciates the response of H.E. Governor of Plateau State and Chairman, Northern Governors Forum (NGF) Rt. Hon. Simon Bako Lalong, to its invitation to attend the summit and be a resource person who enriched our discussions.

The communique came a day after Governor Bello Matawalle of Zamfara State issued a statement threatening reprisal attacks on Southerners in the North if what he called attacks on Northerners residing in the South did not stop. Matawalle’s statement reads in part: “

As Northern leaders, our dignified silence in the face of constant provocation, attacks because of our desire for peace must not be taken as a sign of weakness as no community, no region has the monopoly of violence.

“If Northerners and their means of livelihood will not be protected, accommodated and be dignified anywhere they chose to stay in any part of the South, Southerners should not expect such reciprocal protection from the North as the North has more than what it takes to respond to any kind of aggression and hatred.

Read Also : Unknown Gunmen : Politics Of Nigeria Is Evil, The Nation Stains With So Much Blood – Father Mbaka

“We have seen the destruction, the killings and the devastation recently at Sasha Market against Northerners and their economic interests.

“Properties worth billions of Naira were lost in addition to human lives, yet some leaders in the South West are downplaying the atrocities committed or at best justifying it. Some of them have shamefully gone to the extent of apportioning blames on the victims and casualties of their aggression.

“Last Sunday’s killings of innocent Northerners in Imo is one too many and no matter how we love peace, leaders with conscience and fear of God must speak out against this continued barbarism and hatred. If that is allowed to continue, we will not take that any longer as no human life is better than another.

The ACF also issued a communique on Thursday in which it said it “received reports on the unfortunate killings of some northerners in the South East that seemed suspicious.” The forum said: “We call on security agencies to investigate these killings and fish out the culprits. We also warn our youths who have suddenly started distributing messages on the social media calling on reprisal attacks on Ibos and their business interests in the north.

We the Arewa Consultative Forum stand against all lawless acts of self help and call on all northern youths to stop such evil plans.

“They do not enjoy our support. The Arewa Consultative Forum believes in dialogue and consultation as a way of bringing peace and normalcy back to our troubled region and nation.

We however condemn the payment of ransom and call on the bandits and insurgents who are holding other citizens as hostages to desist from such ungodly acts.

“No religion that is practised in Northern Nigeria permits such sinful acts like holding other human beings as hostages for financial reward.”