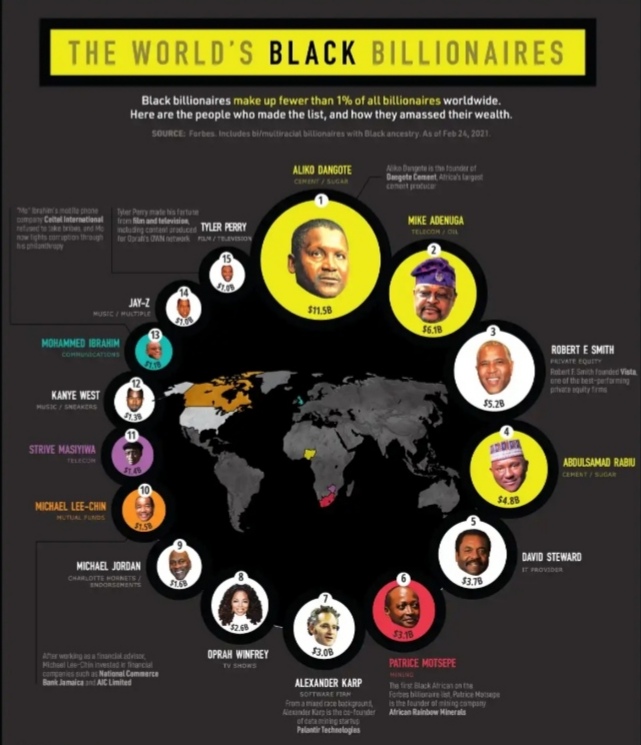 Nigeria now has only three billionaires on 2021 Forbes list of world billionaires, with the dropping off of Executive Vice Chairman of Famfa Oil Limited, Folorunso Alakija.

Dangote retained the top spot of Africa’s richest person with a net worth of $11.5 billion, making him the 191st wealthiest person in the world.

Rabiu emerged as 574th richest person in the world with an estimated fortune of $4.9 billion. He also maintains the position of sixth wealthiest person in Africa.

Despite the worldwide economic impact of the coronavirus outbreak, Forbes said an additional 660 individuals were added to its 2021 billionaires list.

“It’s been a year like no other, and we aren’t talking about the pandemic. There were rapid-fire public offerings, surging cryptocurrencies, and skyrocketing stock prices,” Forbes said.

The oil tycoon, Folorunso Alakija drop  off the global billionaires’ list in 2020, although she still emerged as 20th richest African billionaire in 2020.

Forbes said Alakija’s fortune dropped below $1 billion due to lower oil prices because she is mainly into oil exploration.

“The number of billionaires on Forbes’ 35th annual list of the world’s wealthiest exploded to an unprecedented 2,755 — 660 more than a year ago.

“Of those, a record high 493 were new to the list–roughly one every 17 hours, including 210 from China and Hong Kong.

Another 250 who’d fallen off in the past came roaring back. A staggering 86% are richer than a year ago.”

Jeff Bezos, CEO of Amazon, remains the world’s richest man for the fourth straight year with an estimated worth of $177 billion, followed by Elon Musk, CEO of Tesla in second place with $151 billion.

The United States of America has the highest number of 724 billionaires, followed by China (including Hong Kong and Macao) with 698.

Forbes said it used stock prices and exchange rates from March 5 to calculate net worth.