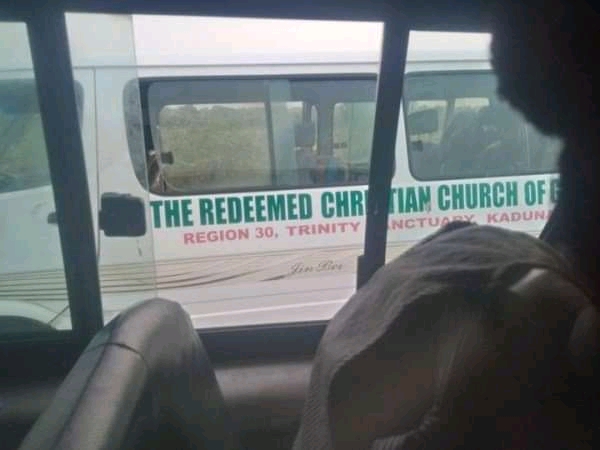 Amid the continued confinement of the 39 students of the Federal College of Forestry Mechanisation, Afaka, Kaduna State 17 days after they were abducted by armed bandits, no fewer than eight members of the Redeemed Christian Church of God, Region 30, Trinity Sanctuary, Kaduna, were on Friday abducted by gunmen.

Hotmedia.ng gathered that the victims were on the church bus travelling for a programme when they were attacked.

A source identified as Eje Faraday, around 7pm broke the news on his Facebook úpage with a picture of the white vehicle.

“All the passengers in this bus were just kidnapped along Kachia Road, 63 km from Kaduna,” he wrote.

A credible source and an official of the church, who spoke on condition of anonymity, confirmed the report.

He said, “They were eight in number on the bus. They were going to Kachia in preparation for the church’s Let’s Go a Fishing Easter programme. The gunmen took them out of the bus and put them in their own operational vehicle. They have yet to contact the church.”

Read Also : Ize-Iyamu In A Big Trouble, As Court Rules Against Him

He said, “I have contacted our officers along that axis. Actually, we have three divisions in that area. I have got responses from two divisional police officers, who said they were not aware of the incident. I am just waiting for the response of the third DPO. When I get it, I will let you know.”

The RCCG Head of Media and Public Relations, Pastor Olaitan Olubiyi, did not answer calls to his mobile, which rang out several times.

Meanwhile, medical experts have raised the alarm that the abducted students of the Federal College of Forestry Mechanisation may suffer panic disorder, nightmares and other manifestations of post-traumatic disorder.

The medical experts, comprising psychologists, psychiatrists and mental health advocate, in separate interviews with our correspondents, warned that when eventually released or rescued, the students could suffer depression, difficulty with attention in class, lack of trust and other mental issues.

Parents of the students had on Monday protested and given Kaduna State and the Federal Government 48 hours to rescue the students, lamenting that they were worried about the health of their children, some of whom they said sustained injuries during their abduction.