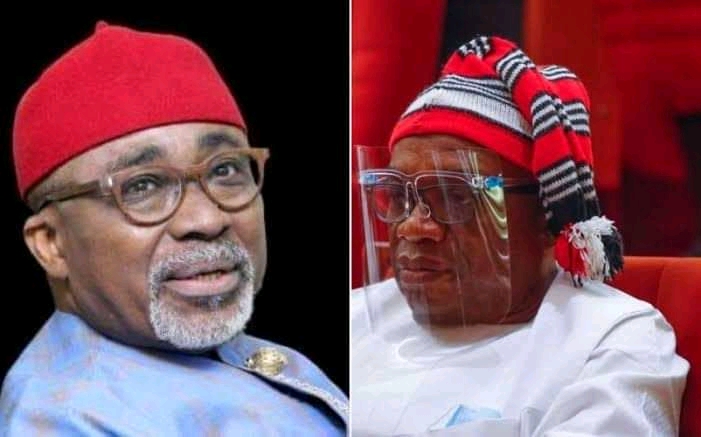 The senator representing Abia South Senatorial District, Sen. Enyinnaya Abaribe, has given Orji Uzor Kalu, the chief of the Senate and Senate representative of Abia North Senatorial Zone a calculated technical knock out. Abaribe commented that he (Orji Uzor Kalu) picked him (Abaribe) from the gutters.

He Enyinnaya Abaribe informed Guardian yesterday during an interactive session, that he was perturbed and worried that Kalu was still in the gutter.

Kalu who made the statement at Aba North Ward 1 during his campaign for the All Progressives Congress (APC) candidate, Mascot  Kalu, for the Aba North/South Federal Constituency by-election that he (Uzor Kalu) picked Abaribe from the gutters and made him deputy governor.

He had also said that Abaribe was so shameless, stressing that he had nothing to show for the 16 years he had represented Abia South at the National Assembly.

Read Also : Gov. Ikpeazu To contest For Senate  Under APC in 2023

“He is busy speaking English as if English Language is what we need. We need infrastructure, good roads, schools and hospitals.

“In Abia North, I have given them 19 roads, renovated schools, built hospitals with a lot of empowerment in just a year at the Senate. Abaribe is so shameless that he doesn’t even have a road leading to his village in Umuekwensu. It is a big shame,” he said.

But in his reaction, Abaribe who was deputy governor during Kalu’s first term in Abia State, said he was worried that his former boss had refused to leave the gutter. “If Kalu said he picked me from the gutters, why is he still in the gutter? That is the question and I think the matter should end there,” he said.

On the allegations that he had not attracted any project to his constituency, Abaribe said: “What has that got to do with him? It is my constituency that should be bothered about my representation, not him”.

“If I am doing nothing at the Senate, my people should worry, not him. There is no need going into all that with him. I cannot come down to his level and responding to him is like bringing myself to his level.”

Both men won election in 1999 as Governor and Deputy Governor, but they did not last as Abaribe was impeached.It was learnt that both politicians were primary school mates and lived at a time on Azikiwe road in Aba. They were said to have dispersed after their primary school and never met again until politics began around 1998.