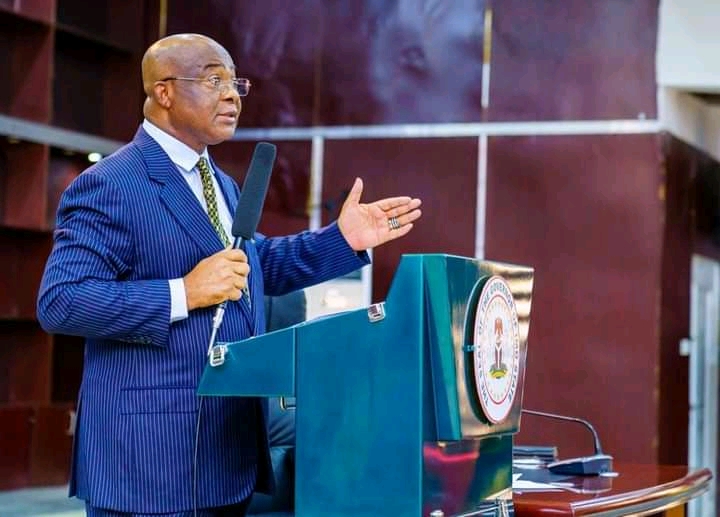 Senator Hope Uzodimma who address the Council members on the Payroll system and the fraud unraveled from it, thereby ordering the publication of those who have fraudulently exploited the payroll system.

In his address, Gov. Hope Uzodimma maintained his stand against corruption most especially in the state civil service and resolved that his government will continue to prioritize the welfare of imo workers.

In his words Gov. Uzodimma stated that his administration will continue to ensure corruption finds no place in our civil service as that is majorly the problem we are faced with and most importantly the welfare of imo workers will be given adequate attention”.

According to Gov. Hope Uzodimma’s address on the civil service payroll system:

– We have verified and cleared a total of 42,845 workers in Imo state and they are been paid their salaries up to date.

– I have on several occasions asked civil servants who have not been paid to come up with their credentials but only few turned up.

– Few days ago, protesters came to the government house gate to protest of none payments of salaries, it is interesting to know that their names were all collected and out of those names 99% have already been paid.

– Those sending them are the beneficiaries of the ghost workers and if you continue to join them to protest, I will charge you to court.

– The 947 people not paid are those who mutilated their BVN, some earning salaries and pensions at the same time, and lot more frauds that has been uncovered.

– 947 of you, if you like lie naked on the road, if you don’t come to data center or the head of service and explain yourself, I am sorry, we are not going to payroll you.

Read Also : Okorocha To Uzodinma: “This Attack Has Open A New But Ugly Chapter In Imo Politics” .

– 947 civil servants with some discrepancies, I will also publish their names so that Imo people will know why you have not been paid.

– These over 10,000 names that were captured duplicating their names and receiving double salaries at the local government level and were illegally employed without any record or file will not be patrolled.

– If you are ready to fight, we will fight back but we cannot allow you to defraud the government.

– I will inform the civil service commission that those people were not employed.

– Those of you who were employed as drivers and went behind and converted their steps to become average workers and health workers, we have dropped your names because you have been earning money under the special package CONHENSS and Agric workers when you know that you are not an Agric worker.

– If you catch me were I steal as a Governor, publish my name and if I catch you, I will publish your name.

– We now have an automated nominal roll of every civil servant in the state.

– Only those that are cleared will be paid.

– Once you retire, your name is transferred to pensions payroll system, no need for authentication anymore.

– Government can not pay gratuity as we have a burden of 58 Billion of 20years of backlog.

– We are going to migrate to the new pensions system called contributory pensions.

– Somebody paid for the buses they use in coming for the protest, but if they want to help you, they should call the toll free numbers, go to the data center or the head of service.

– Before we came in, the payroll system was handled by a consultant in Lagos with a lot of fraud but we have come to return dignity to the civil service

– On that note, I will give the commissioner for Information these names to publish tomorrow.

– Every civil servant has a social benefit number IMSBEN, if you don’t have that number, it means you are not a worker.

– If you know you are a worker you don’t have the number, ask your head of department.

– Our problem is not payment of salaries but Imo civil service was excluded from governance and we are here to reintegrate you back into the system.