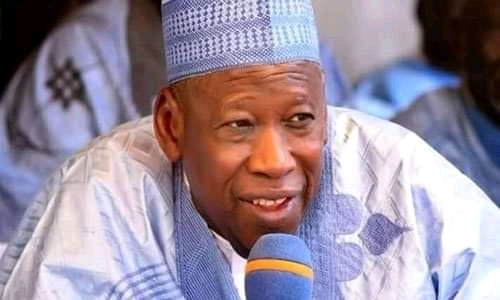 Kano remains Nigeria’s safest state because of the measures taken by its government to safeguard it, Governor Abdullahi Ganduje said yesterday.

He expressed worries about the rising insecurity around the country, including weekend’s attack on Benue State Governor Samuel Ortom.

Read Also : Insecurity: We Are In A Critical Situation – Defence Minister

Ganduje spoke at the State House in Abuja after meeting with President Muhammadu Buhari.

He said: “All what I know as of today is that Kano is the most peaceful state in the federation and this is not by chance, there must be some security measures that we have taken, like full cooperation among the security agencies in Kano State. We introduced the command and control centre; the CCTV where we are viewing the whole Metropolitan Kano, we have the most powerful tracker vehicle, equipment in Kano.

Read Also : SEX Is sweet But There’s POISON In Between The Legs

“Falgore Forest where bandits usually inhabit, we said no, not in Kano State. We established a military training ground in Falgore Forest and therefore bandits cannot inhabit it. Our border with Kaduna, we have a forest and where we are establishing ruga programme, we discussed with nomadic Fulani, they agreed to be settled there. In fact, other Fulani are even coming.

“In conjunction with Islamic Bank, we’re building dam, artificial insemination centre, veterinary clinic, school for their children and all what it takes to form a settlement, we’re doing that. “

Read Also : Police officer, Nine Others Confirmed Dead As Gunman Goes On Rampage In US Supermarket.

“We also established a security training institute where we are training our young men and women for community policing, even yesterday, I graduated graduated 200, whilwy 500 are under training there, with the advice of the security agencies in Kano.

“So all these efforts are in order to keep Kano in the peace, apart from other policies in education, free and compulsory education, reforming the Almajiri system, what we have done to the health sector, and so many other things. But this one is left for the people to say”, he said.

On the attack on Ortom, Ganduje said it became worrisome that criminals could lay siege to a governor, wondering what the fate of the ordinary citizen, who does not enjoy the sort of security protection of governors.

He expressed hope that the situation would get better soon, citing the recent appointment of new service chiefs, noting also that President Buhari had shown seriousness in stamping out the menace.

“I think it’s unfortunate, but I believe with appointment of new service chiefs, new strategy will be developed and I think Mr. President has always been serious on this issue, but is rather unfortunate.

“Not only governors being attacked, anybody who is attacked in Nigeria, one should be worried because life is life. Certainly we’re worried because a governor is supposed to have some security with him, let alone of an ordinary man who has no security.

“So you can see how serious the situation is. It’s unfortunate, but we believe will come over it”, he said.

The governor said the Kano State government is constructing a world-class three-level road interchange, to be named after President Buhari, in appreciation of his commitment to Kano’s infrastructure development.

According to him, the interchange, consisting of flyover, bridge and underpass, which is sited within Metropolitan Kano, became necessary because of the fast growing population of the city, a situation brought about by the insecurity in the northern regions of the country.

He said Kano had become the safest place in the north as a result of various investments of his administration into security.

He added: “I commissioned a group of engineers who visited all the world capitals, the most important one, and came up with a design. So this design is one of the world’s most interesting designs, interchange design in Kano State now when completed.

“So it’s not an issue of Nigeria or issue of Africa, I beat my chest to tell you that it’s a blend of interchanges from different parts of the world, in order to ease traffic.

“We revised the master plan of Kano state and all those areas where we have holdups we either build underpass or we build a bridge, and now we have resorted to putting the three together in one place; that is flyover, bridge, and underpass, all at one point so that there’ll not be any traffic jam”, he said.