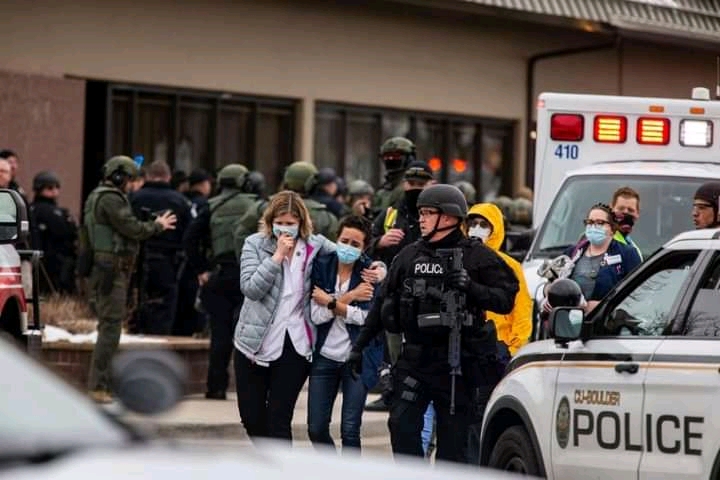 Police officer, nine others confirmed dead as gunman goes on rampage in US supermark

Ten people were killed Monday, including a police officer, when a gunman opened fire at a supermarket in Boulder, Colorado, the second mass shooting in the U.S. in a week.

“These were people going about their day, doing their shopping,” Boulder District Attorney Michael Dougherty said at a late-night press briefing. He described the day’s events as “a tragedy and a nightmare.”

The police officer who died was identified as Eric Talley, 51, an 11-year veteran on the Boulder force. Talley was responding to the King Soopers grocery market when he was gunned down. His police chief, Maris Herold, appeared to be choking back tears as she spoke to the media Monday night and confirmed the death toll.

“I have to tell you [of] the heroic action of this officer when he responded at the scene,” Herold said, explaining the Boulder Police Department got a call about shots fired early in the afternoon. “Officer Talley responded to the scene – he was the first on the scene – and he was fatally shot.

“My heart goes out to the victims of this incident and I am grateful to the police officers that responded,” she said. “And I am so sorry about the loss of Officer Talley.”

“There is no ongoing public threat,” Yamaguchi said. “We do have a person of interest in custody. That person was injured during the incident and is being treated for the injuries.”

No motive for the attack was disclosed. Matthew T. Kirsch, the First Assistant United States Attorney for the District of Colorado, said the FBI and other federal agents will be assisting in the case. He promised that the “full weight of federal law enforcement” will be brought in the investigation.

The shooting comes six days after eight people – six of them women of Asian descent – were killed by a gunman at three spas in Atlanta and a nearby county.

Roberto and Ilce Rivero’s son, who attends Fairview High School near the King Soopers feels shootings are the norm, and he hopes that feeling will change.

“I hope this tragedy… will help change laws, gun laws in particular, and we can all work together to make a better, more peaceful world for our children,” Roberto said, then adding, “This is a sad day for Boulder.”