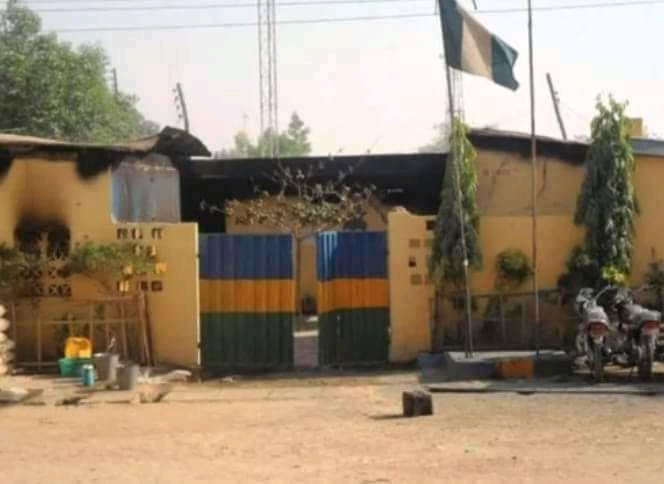 The gunmen, who invaded the divisional headquarters armoury on Saturday night, freed suspects in the detention facility and carted away arms.

Read Also : ‌In Imo State: Police officerrs On The Run As Hoodlums Set Aboh Mbaise Police Station On Fire
It was gathered that the gunmen on arrival condoned off the divisional headquarters located at Umueze Road and opened fire.

According to report, the gunmen sacked police officers on duty, freed suspects, invaded the facility’s arms storage department before setting it ablaze.

It was also stated that the culprits did not flee immediately but stayed by and supervised the burning of the police facility.

The source said, “The gunmen came, condoned off the divisional headquarters and immediately opened fire on the policemen on duty. This was after they had freed all the suspects and collected all the arms. Afterwards, they set it ablaze using petrol to ignite the fire. This is very unfortunate.”

The Interim Management Committee chairman of Isiala Mbano LGA, Chika Okoroike, confirmed the attack. He said that he was facilitating the rescue mission.

He blamed the removal of soldiers from Anara town 24 hours before the attack.

Okoroike said that he made fervent moves to make sure that the military men posted out of Anara town on Friday without any reason returned, but all to no avail.

The police spokesperson in the state, Orlando Ikeokwu, also confirmed the attack on the division.

This makes it the fourth police divisional headquarters that had been attacked since February after Obowo, Aboh Mbaise and Ihitte/Uboma divisions were attacked, respectively.