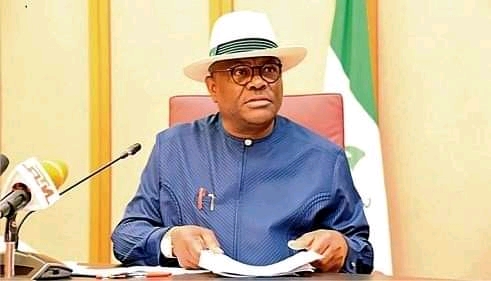 Over 5000 Peoples’ Democratic Party youths in the Southwest on Wednesday called on the leadership of the party to pick the River State Governor, Nyesom Wike as running mate for its presidential candidate.

The PDP youths said Wike’s choice will be a perfect arrangement that would put the party in good stead to wrestle power from the All Progressive Congress in the forthcoming 2023 elections.

In a statement in Ado-Ekiti signed by the Convener, Com. Akeem Adebomojo, the youths under the auspices of the southwest Youths Coalition (SWYC), said that Wike remains the best material given the realities of the last presidential polls and current indications in the polity.

The group advised the opposition party, to field competent and popular people as the PDP President and Vice Presidential candidate for a smooth and resounding victory in the coming 2023 Presidential election.

“We came to this conclusion, after a painstaking consideration of the indices that led to the party’s defeat in the 2019 Presidential election, despite the glaring failure of the Buhari/APC led administration.

“Looking at the geographical spread of our party today, South-south is the only zone out of the six geopolitical zones of the federation that is totally PDP.

“Also, there is no gainsaying that Governor Wike has done excellently well in Rivers State such that he has been able to relegate the APC to the precipice which the unfortunate party really belongs.

“Aside the fact that Rivers State is religiously PDP, the unprecedented, admirable and sterling performance of Governor Wike has endeared the hearts of many Nigerians to the ‘general’ of the PDP and placed the South-South as a stronghold of our great party.

“Politically, Rivers State has voted PDP in all elections since 1999 and the state has become a force to reckon with in determining the outcome of presidential polls in the country. A case in point is that in 2011, former President Goodluck Jonathan won comfortably with 1.8 million votes in the state and this was the highest total gained sub nationally that year.

” It is against this background that we strongly advise and insist that Governor Wike be given this great opportunity to take our great party to a resounding victory in the 2023 presidential polls as the Vice Presidential candidate of PDP.”