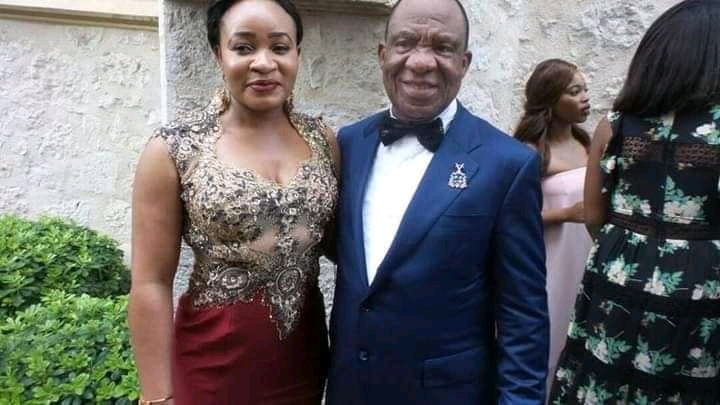 Agnes Ikpea who had been married for 39 years to Leemon Ikpea whose now a big oil magnate & a billionaire in the business industry.

Mrs Agnes a Catholic married Osaghale Leemon Ikpea (Chief) when they had nothing financially! They both struggled through thick & thin in Delta State Warri then came to Lagos to further the hustle.

READ ALSO : The Latest Love/Marriage Engagement Proposal That Is Hilarious.

But during those hardship periods Mrs Agnes & her husband Leemon Ikpea (Chief) had 6 children & from their humble beginning they both lived with her husband’s two brothers Joe & Tony Ikpea.

It was such an uncomfortable situation back then as you can imagine where Mrs Agnes was the housewife & cook to all of them.

As time progresses Fortune decided to smile on Osaghale Leemon Ikpea who later became a big mogul in the oil industries & a business man of repute who now controls Billions of Naira! For those who don’t know him can check his profile on Google to see his success story in the business world.

READ ALSO : How To Keep Away From Extra Marrital Affair

Chief Osaghale Leemon Ikpea won the business man of the year in 2018 back then! Even President Muhammadu Buhari showered him with praises & Encomium.

A Giant in the business world who lives with his wife in Banana Island & his children who are also successfully trained by them.

But the Devil does not like it where it’s rosy as Chief Leemon Ikpea went outside his matrimonial home to play an away match (he had an affair) & scored a goal (side chic pregnant) but didn’t tell his wife as he was training the child secretly.

Soon afterwards the wife Mrs Agnes got to know about the child & she told her husband to bring them in after all we are polygamous by nature as Africans.

But little did she know that would be the Genesis of her downfall as the side chic whose name is Tina Ochucko became the commander in the house soon afterwards as Chief Leemon Ikpea listens to her request. She dictates the tune.

Trouble began when Tina the side chic’s son who was sent abroad to school but was later expelled due to his bad character & poor performance as the school could no longer curtail the whim of a spoilt teenager. The boy came back home to school but not doing well.

So it was time to start pointing fingers.

Tina the side chic a cunning snake started blaming Mrs Agnes the first wife for all her woes! Forgetting that she refused to follow up on her son’s studies abroad as she was seen everywhere with Chief Leemon Ikpea in his various private jet flying around the world thereby neglecting her child who was left alone in a strange land where he could not be handled properly parental wise.

READ ALSO : How To Avoid Unnecessary Breakup In A Relationship

Mrs Agnes Ikpea a wife of 39 years to Chief Leemon Ikpea the Billionaire is now a Witch according to the husband snatcher Tina Ochucko whose now controlling the husband who seems to have forgotten the time of humble beginnings.

He sent her packing through a Kangaroo court Injuction as thugs came into their banana island to take out Mrs Agnes belongings despite a higher court ruling nullifing the lower court injuction.