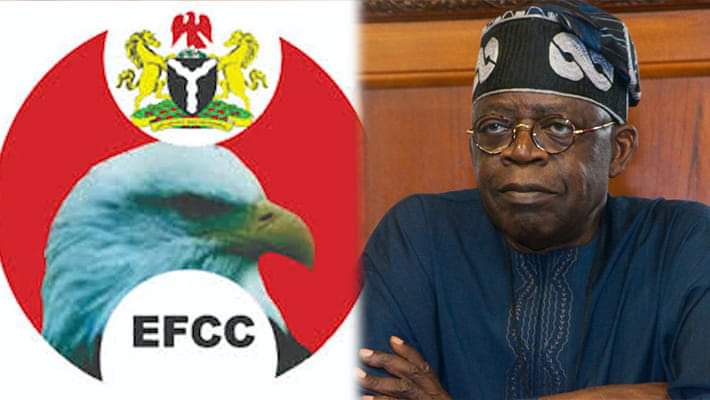 The Economic and financial crime Commission EFCC have started Probing the national Leader of All Progressives Congress APC and the Former Governor of Lagos State, Asiwaju Bola Ahmed Tinubu.

The EFCC is Probing Tinubu of his accumulated wealth.

It should be recalled that Asiwaju Bola Ahmed Tinubu is contesting for the Presidential race.

The Governor of Ekiti State, Governor Kayode Fayemi may also be contesting against Asiwaju Bola Ahmed Tinubu in the All Progressives Congress APC Primary Election.

It is no more news that Tinubu is contesting for the Presidential Polls.

Though, Tinubu is contesting for the Presidential Polls, but some nothern Leaders may not want Tinubu to Contest the Primary Election in the Party not to talk of being the President.

Tinubu along with some other members of the All Progressives Congress APC who are loyal to him have been facing serious Challenges from the northern Elders most especially from the President’s camp.

Though, President Muhammadu Buhari may not really mean bad for Tinubu but his People are really working against Tinubu’s Ambition.

The question is, does Asiwaju Bola Ahmed Tinubu deserve what he’s facing in the Party Presently with the roles he played in the election that brought in President Muhammadu Buhari both in 2015 and 2019 Presidential Polls?

He supported President Muhammadu Buhari with everything he has in his capacity.

The EFCC Indictment  On Tinubu – Questions to Answer

Is the  Economic and financial crime Commission EFCC is trying all his Possible best to stop Asiwaju Bola Ahmed Tinubu from contesting the Presidential Polls in 2023 Presidential Election?

Are the Tinubu Political opponents the ones instigating the Economic and financial crime Commission EFCC to witch hunt Tinubu ahead the 2023 Polls?

But Nevertheless Tinubu has never come out to say anything or Pass derogatory comments on each and everyone of them.

Tinubu has never seen anyone of his opponents as enemies rather as his Political friends.

Most of the perceived People that are working against his Presidential Ambition are still doing things together with him.

Asiwaju Bola Ahmed Tinubu is Politically matured and can’t see any one of his Political opponents as his enemies.

Tinubu Believes there is no Permanent enemies in Politics and enemies today can turn friends tomorrow.

Are Tinubu’s Political opponents from the north are working with the Tinubu’s caucus from within?

Tinubu appealed to President Muhammadu Buhari to be subtle with him.

Meaning that Tinubu is appealing to the President to give directives to the EFCC Boss to be more subtle with him.

Is  Asiwaju Tinubu  truly a man of honour and he does he deserve what he’s Presently passing through.?

But  will Tinubu scale through?

But will he still contest the Presidential Polls in the All Progressives Congress APC, contrary to what his opponents are clamouring for him?