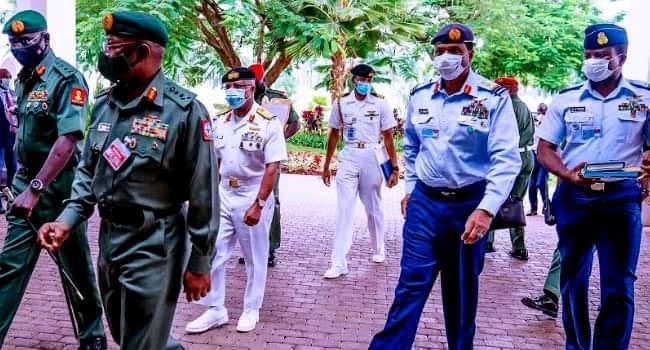 The Senate has confirmed the nomination of the immediate past service chiefs as non-career ambassadors, despite criticisms in some quarters.

The Senate Minority Leader Enyinaya Abaribe, on Tuesday, questioned the nomination and confirmation of the ex-service chiefs when the Senate had on three different occasions called for their sack.

Senator Abaribe also questioned why the petitions against the former service chiefs were dismissed without explanations.

But Senate President Ahmad Lawan dismissed Senator Abaribe’s concerns, ruling that the nomination of the former service chiefs cannot be nullified simply because the upper chamber had called for their sack, noting that this is totally a different assignment.

The Senate President promptly stopped any further debate on the matter.

In his concluding statement, Senator Lawan added that the former service chiefs have served the country to the best of their abilities.

He urged the Executive to utilise their experiences as much as possible and they should be posted to countries where they will be useful.

President Muhammadu Buhari had on February 4, nominated the immediate past service chiefs of the nation as ambassadors.

The Special Adviser to the President on Media and Publicity, Mr Femi Adesina, disclosed this in a statement.

Adesina revealed that President Buhari has forwarded the names of the nominees to the Senate as non-career ambassadors-designate.

In a letter addressed to the President of the Senate, Ahmad Lawan, the President was quoted as saying “In accordance with section 171 (1), (2) (c) & sub-section (4) of 1999 Constitution of the Federal Republic of Nigeria as amended, I have the honour to forward for confirmation by the Senate, the under-listed five (5) names of nominees as Non-Career Ambassadors-Designate.”

President Buhari appealed to the Senate to give expeditious consideration to the nominations.

The former service chiefs were appointed as non-career ambassadors-designate a week after their replacement with new officers.

They were said to have tendered their resignation from their positions amid heightened calls that they should be sacked due to the disturbing rate of insecurity in the country.