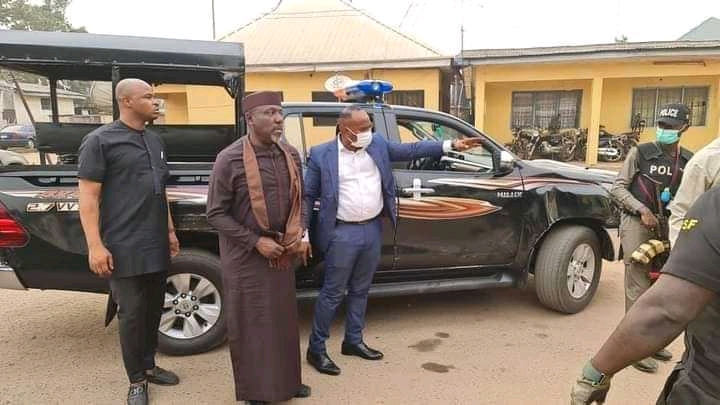 Okorocha To Uzodinma: “This Attack Has Opened a New but Ugly Chapter in Imo Politics”

Former Governor of Imo State, Senator Rochas Okorocha has told the current Governor of the State, Hope Uzodinma that the attack on him by his aides “has opened a new but ugly chapter in Imo Politics”.

Senator Okorocha made this known through a statement sent to Hotmedia.ng by his Special Adviser on Media, Sam Onwuemeodo.

He noted that Okorocha has never been a violent man and assured that they will react fully to the situation.

According to the statement, “more than 1000 thugs, armed to teeth with knives and guns and led by Chinasa Nwaneri, governor Hope Uzodinma’s Special Adviser on Special Duties today, Sunday, Feb. 21, 2021, with the backing of armed policemen from Government House, attacked the former governor of the State and Senator representing Imo West Senatorial District, Senator Rochas Okorocha’s Convoy. They attacked and damaged all the Vehicles in his Convoy. They also attacked his personal  aides.”

“Senator Okorocha was with only his personal aides when the thugs unleashed the attack.”

“Okorocha has the strongest political structure in the state and teaming followers in the State. If he had expected the attacked, he would not have moved with his personal aides alone.”

“Okorocha has never been a violent man. This planned attack but unprovoked and unwarranted, has opened a new, but ugly chapter in the politics of the State.”

“The thugs also shot Dr Uzo Anwuka who was with his inlaw, Senator Rochas Okorocha when the attackers came.