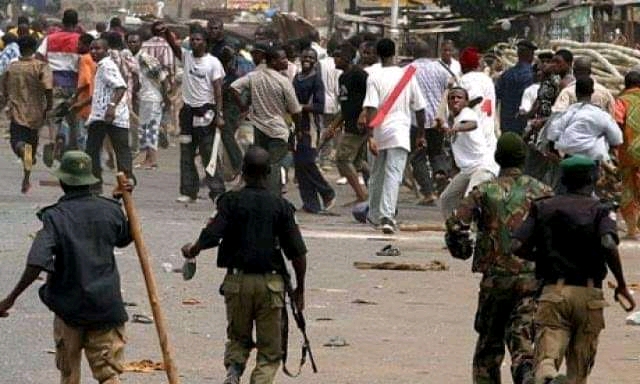 Violent clashes between the Hausa and Yoruba tribes occurred in Shagamu, a Yoruba dominated town, on 17 July 1999.
It is reported that at least sixty people have been killed.
This violence followed the death of a Hausa woman, who was killed when she was found watching a Yoruba religious ceremony, which was forbidden to outsiders.

The Nigerian authorities deployed police reinforcements in the towns.
This violence spread when Hausas fled to Kano, and the local population attacked Yorubas resident there, a dawn to dusk curfew was also imposed and troops sent to the city.

The violence was reported to have subsided by the end of July, and there have been conflicting reports on the number of casualties.

The current Yoruba-Hausa fighting began in mid-July 1999 in the town of Shagamu, 36 miles north of Lagos, a traditional centre of the kola nut trade where Hausas have lived for generations.

About 60 others were slaughtered and dozens of homes, shops, mosques and market stalls were burned to the ground, both in Yoruba neighbourhoods and in the mainly Hausa quarter known as Sabo.

Ethnic militias proscribed: Hausa victims of the Shagamu clashes fled to the northern city of Kano where, in retaliation, up to 70 Yoruba residents were killed on 22 July, dozens were wounded, and hundreds were driven from their homes.

The police blamed Adams’ supporters, who had whipped up mainly local disputes