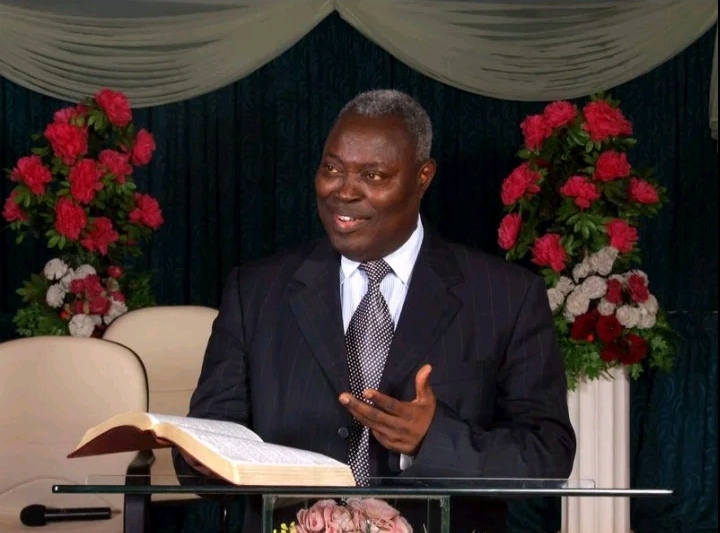 Pastor W. F. kumuyi is one of the most powerful men on planet EARTH, His life is filled with so much Supernatural endowments

personally w.f kumuyi as a man who is not normal, Because he doesn’t struggle for the supernatural.

WHO IS PASTOR W.F KUMUYI
Pastor w.f kumuyi is the founder and General suprintendent of the Deeperlife Bible church A.k.a Deeper Christian Life ministry(D.L.C.M)
Pastor W.f Kumuyi was born into a Christian family in Erin-Ijesha, Osun State, western part of Nigeria. He completed his secondary school education in 1961 at Mayflower School in Ikenne, Ogun State, from where he proceeded to the University of Ibadan and in 1967 graduated with a first-class honours degree in mathematics where he graduated as overall best graduating student in that year.

He subsequently took a post-graduate course in Education at the University of LAGOS.

He became a born-again Christian in April 1964.
On his upbringing, Pastor W.f Kumuyi was quoted to have said
He was influenced by John Wesley, Charles Finney and Charles Spurgeon.

He went on, in the early 1970s, to become a lecturer of mathematics at the University of Lagos.

In 1973, while being a lecturer of mathematics at the University of Lagos, Kumuyi began a Bible study group with 15 students who had come to him for Bible training.

This training became the foundation of the Deeper Christian Life Ministry.

In 1975, Pastor w.f Kumuyi was expelled from the Apostolic Faith Church for preaching on the baptism of the Holy Spirit.
He continued his independent ministry, which in 1982 became the Deeper Life Bible Church.

Pastor w.f Kumuyi met Abiodun Olowu in September 1972. She became one of his Bible study students and a member of his fledging Christian ministry.

They got married on 13 September 1980 in Lagos, and they have two children, Jeremiah and John. Abiodun Kumuyi died on 11 April 2009.
On 13 October 2010, exactly 18 months after the death of his first wife, Kumuyi married Folashade Adenike Blaize in London. Folashade is the Administrator of the Deeper Life Bible Church, London.

In 2013, Foreign Policy magazine listed Pastor W.f Kumuyi among the “500 most powerful people on the planet”.

AWARDS
Billy Graham church came to Nigeria to give pastor kumuyi an AWARD for the gospel.
Pastor kumuyi was a university Don
In 2018, Kumuyi received an honorary PhD from the University of Abuja.

LAGOS ANCIENT PYTHON AND PASTOR W.F KUMUYI
There was an ancient python in Lagos which killed pastors so the land was left untouched
The king said who ever could kill the snake should take over the land
Pastor kumuyi was told about it he sent his pastors there they went there and ran back.

So pastor kumuyi himself gathered prayer warriors and they stormed the land not too long the ancient python started approaching and all the pastors who came with pastor kumuyi ran away.

The pastors who ran away thought baba kumuyi was dead they came back to check on Pastor kumuyi only to discover the ancient python on the floor dead,and the land was handed over to the church.

That is where deeperlife head quarters is now

FINANCIAL STATUS
Pastor kumuyi was one of the first pastors who ought to have own private jet in the early 90s but he declined when he was opportuned
Pastor kumuyi doesn’t have a BANK ACCOUNT
He is been taken care of by the church.

DANGEROUS MIRACLES PERFORM BY PASTOR W.F KUMUYI THROUGH GOD
Pastor kumuyi is known for his short prayers and has not been seen laying hands on people he declares from the pullpit and there are miracle outburts in the mammoth crowd
His prayers are usually 4/5minutes then after the final Amen
There will be serious uproar in the congregation.

PASTOR SUNDAY ADELAJA COMPLIMENT
Pastor Sunday adelaja said somebody having a plastic eye began to see after the prayers of pastor w.f kumuyi
Pastor Sunday adelaja confirmed that he got repented under the sermon of pastor w.f Kumuyi.
Numerous dead Individuals have been brought back to life after the prayers of pastor kumuyi
Pastor kumuyi said he has seen almost all the Miracles in the Bible happen.

It was a wowing moment at the Dunamis International Gospel Center Abuja. God used Pastor W F Kumuyi to do the Miracle that have never been seen in Deeper Life Church for the past 10 years of my experience in Deeper Life as said by a Man.

The Theme of The Programme being COME UP HITHER Pastor WF Kumuyi derived his Message title from the theme titled COME UP HITHER AND GO UP HIGHER, after introducing the title, he divided the message into three subheadings as well:

After the sermon, pastor kumuyi made an altar call and thousands of people were rushing ? to come and surrender their lives to Christ. When Daddy led them to Christ, he told the congregation that they should get ready to dance because there is going to be an explosion of Miracle
Daddy kumuyi made a short prayer, after the last amen brethren come and see Miracles.

The lame began to drop their crutches, the mad people began to recover, the paralyzed began to run, the deaf began to hear.

In fact, we cannot fathom the depth or the extent of the miracles that happened in Dunamis but it’s greater than the ones I have been seeing in Deeper Life Church as said by an attendant.

The Miracles were incredible. In fact, Pastor Paul Enenche had to come and give a hand shake to Daddy Kumuyi telling him to come back again.

A woman that have not walked for the past 22 years ago, began to walk and run. She said after the prayers, she saw some beings on black attires going out from her leg and that’s when she began to walk. Oh it’s was all wonderful!

Pastor Paul Enenche led the congregation into another realm of dancing to fulfill the prophecy given by Daddy Kumuyi.

LAGOS STATE INVASION
One striking feature of the Deeper Christian Life Mini-stries’ Lagos City-Wide Crusade in partnership with the Christian Association of Nigeria, CAN, besides the rain of miraculous feats in all the venues the train had birthed thus far, has been that despite the huge financial outlay in logistical arrange-ments the church has not collect-ed offering from the numerous participants.

The month-long city-wide crusade intended to usher in a new vista of spiritual, moral, physical, material, political and economic transformation for the state and by implication the country at large, was flagged off on September 8 at the Police College, Ikeja and has since moved to different locations in the state as participants silently expressed pleasant surprise that the church was not collecting offering as most churches do.
Participants loudly wondered how the church would be able to defray the enormous cost of paying for the venues, renting and moving audio-visual equipment to locations, renting electric generators, rugs, flower pots, chairs, canopies, tents and pay-ment for live television coverage as well as security of life and property.